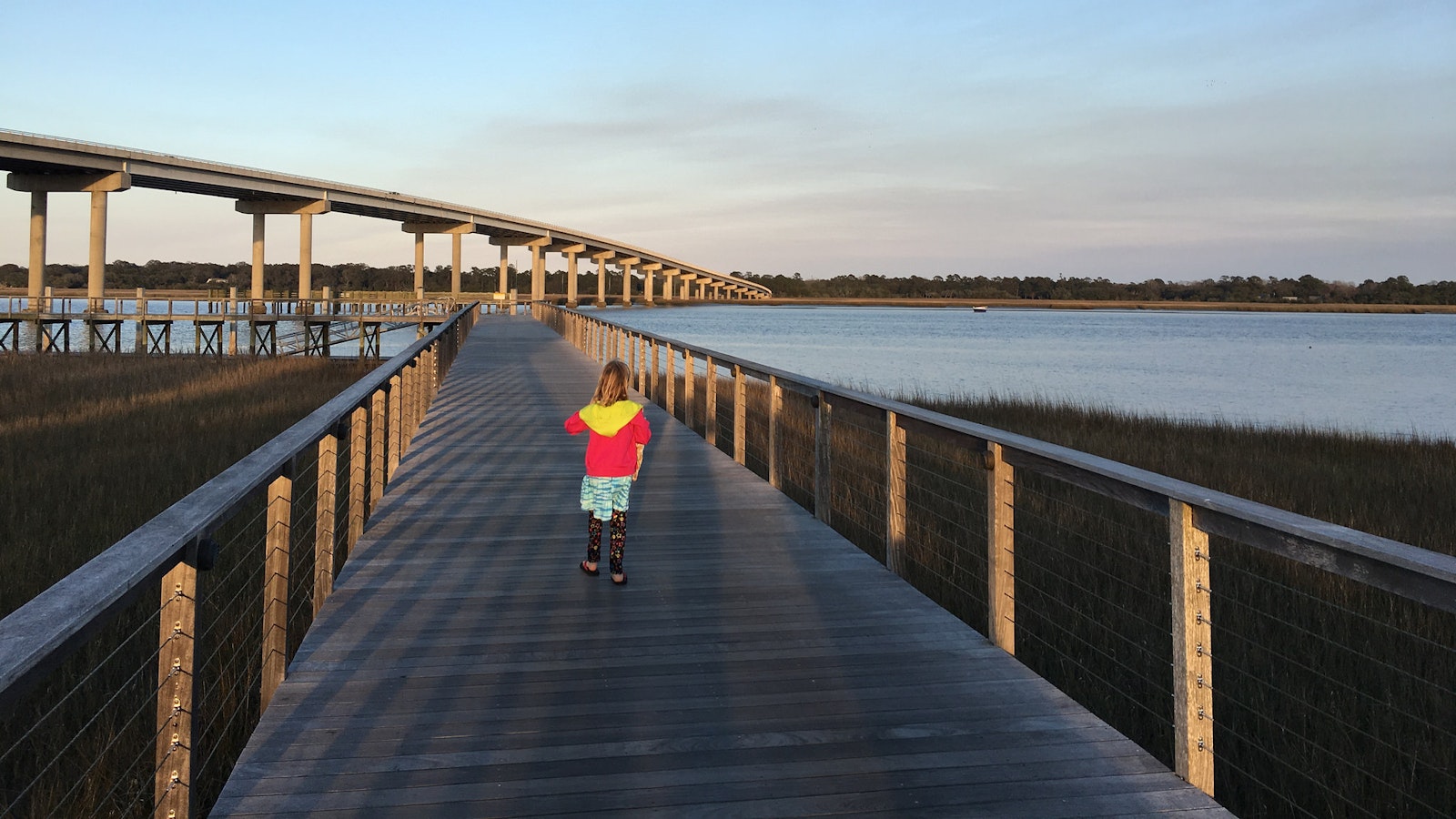 We left Charleston in the morning, looking more like we were fleeing a fire than exiting a slip. We had a 9 am lift bridge draw to catch and needed to make the most of the lower current speed near slack tide. This is because we have a near 30k pound boat now instead of a 10k pound boat and we're still not experts in at least looking like we know what we're doing. First comes the looking confident, then comes the confidence, or so I've heard. Currents pose an additional adrenaline response. I’ll perhaps blame our neglecting to go through our takeoff checklist on said adrenaline. Excitement swirled through our tired heads and perhaps skewed our glossy morning eyes. We were leaving Charleston after a month of having the boat docked there: a month of selling our belongings and sewing on all the buttons holding together our life in Minneapolis. 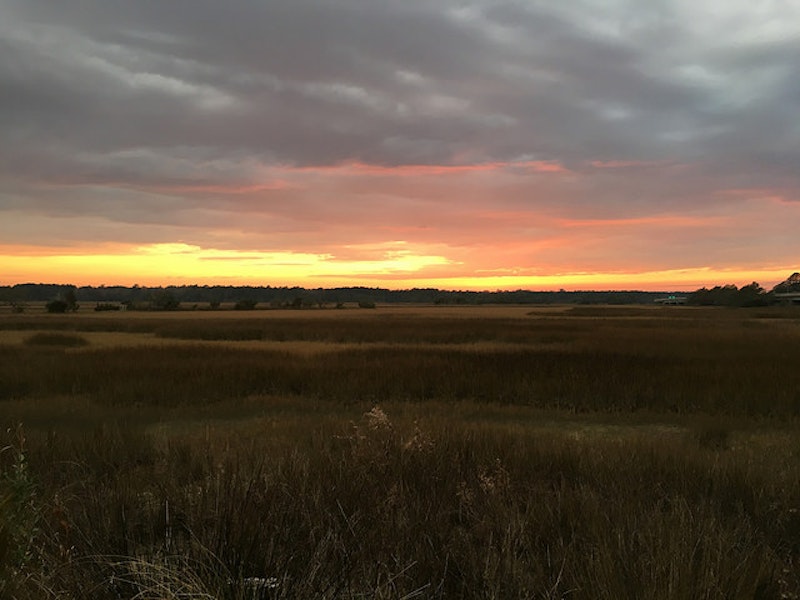 Grassy sunset along the Stono River

The Stono River is muddy and yellow-brown with tall grasses and modest low-country homes adorning it's sometimes rocky shores. My palms started to get soggy with anticipation of a bridge. I tried to stay focused and took out my phone to play photographer. This is actually not a good way to stay focused.

Halfway to the lift bridge, about ten minutes into motoring down the river, Kai’s expression changed from his usual calm focused to panicked. “The seacock!” he exploded. Per usual, I dropped what I was doing and asked what seacock, running downstairs as I figured most seacocks would be helpful enough to place themselves by the water line. In the time it took Kai to explain, I remembered which one. We had forgotten to open the water intake to the engine; the seacock that lets in cool, sea water that cools the engine so it doesn’t melt/overheat/explode. You know, the important one that keeps the engine insides from enduring an irreversible, quick, melty death. I flew open the stairway that encapsulates the engine and thrust the plastic stick over. I replaced the stairs and climbed rubber-legged back to the cockpit. We figured we were fine since there was no smoke or other outright signs of damage.

We exited Charleston harbor and passed by the Fort Sumter monument/island and Rev asked what Fort Sumter was. On our previous passage down the Chesapeake, I had tried to explain World War II to Rev after seeing a military destroyer ship on the water. We somehow managed to divulge into WWII and I told her of Hitler and his ways. I was perhaps too graphic in my teachings, somehow forgetting that watching Beauty and the Beast required multiple pauses to talk through what was happening with major emphasis on the fiction part. When Fort Sumter came up, I tried to explain the Civil War to her and hopefully it went better because she didn’t get upset.

Either way, within 10 minutes of Fort Sumter, we saw dolphins and I was eager to be saved from this history lesson by dolphins! Every uncomfortable parenting moment should be saved by dolphins. I was at the helm keeping our distance from cargo ships passing in and out of Charleston as a dolphin surfaced ten feet away from the cockpit. I couldn’t believe my eyes and Rev didn’t believe me until she saw it herself. A few followed us into the open ocean but by then I was so seasick I couldn’t pay much attention. But there are dolphins! My mind kept reminding me that perhaps one of the most magical sea creatures around was literally AROUND. They're basically humans and I was basically being a rude guest in their home. I may have even been on watch while Kai worked below. The seasickness had turned me upside down. All I could register was that we were in deep water and the winds were consistent, meaning I could hopefully trust autopilot for a quick snooze.

Seasickness is apparently terrible when coming off a sinus cold. We were all feeling icky and the boat just sailed on. The weather was beautiful: 15 knots of wind slightly off our bow full sun, and 70 degrees. We set the autopilot and snacked on various salty/carb-filled treats.

We took turns napping and watching as we all battled our forms of seasickness. I get tired and nauseous, Rev gets cranky and insists beyond a doubt she's not hungry even after she plows through a bag of potato chips on her own. Kai does a sort of half-inebriated form of Kai but still miraculously harbors the ability to work down below, looking at a computer screen. 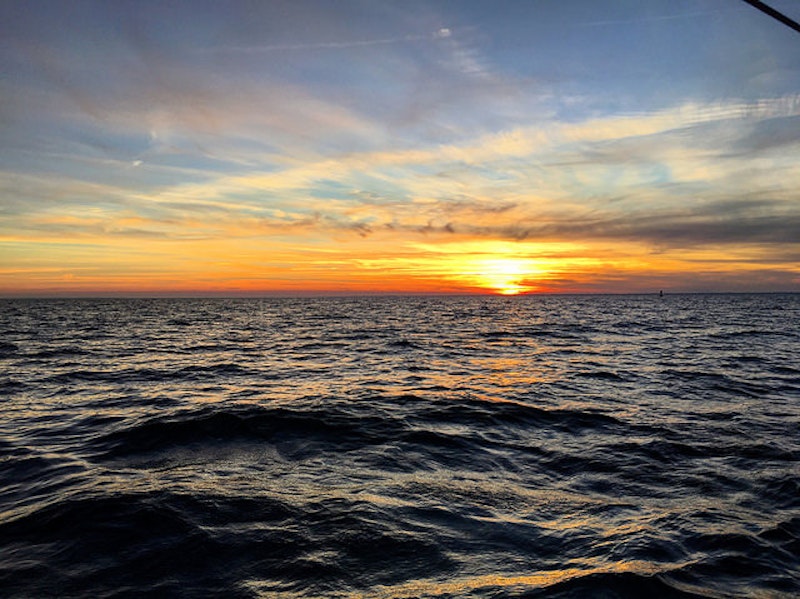 We sail through the night and it is my first overnight on the boat. Night sailing is not my favorite but it definitely has some benefits. There are a lot of things that can go wrong and things that are more difficult than day sailing. Kai and I take 2-4 hour shifts depending on the conditions. On this night we have little winds and calm seas so I fall asleep HARD with Rev at 7 pm and Kai wakes me up around 11 pm, saying I am welcome to take over now. He's so kind in his delivery that I fall back to sleep for at least another 30 minutes before getting to the cockpit for my shift.

We spend the next day watching more dolphins, this time a whole pod that follows our boat while effortlessly keeping just feet from our bow. Rev and Kai sit on the bow and watch with more squeals of excitement. Every time we think they're gone, they reappear.

Halfway to our destination (we're sort of headed toward Jekyll Island), our winds die and Kai suggests we turn on the engine to motor sail (thanks fully-battened main!). We motor sail for a bit and I use the opportunity to wash dishes with hot water from the engine. It takes me awhile to notice after going through the bout of seasickness, but I slowly notice that the bilge pump is constantly roaring from beneath the floorboards. I tell Kai and he investigates while I take over watch.

Long story short, he finds the muffler and exhaust pipe has been melted through and the sea water-cooled engine is pouring salt water into the engine compartment which is draining into the bilge. Icky sticky salt is literally being sprayed everywhere. Engine OFF! He works tirelessly all afternoon while we slowly sail and head for Jekyll. The weather and dolphins are perfect companions for this relaxing sail but we were pretty far off shore so we couldn't get any information about a new muffler

We decided to sail as long as we can into the entrance of Brunswick, GA, and assess the damage more fully there. It was of course night time when we arrived at the LONG entrance. We had currents against us and tricky breaker rocks to avoid, but we made it and anchored in the bay between Brunswick and Jekyll Island since our keel is far too deep for navigating Jekyll Island's waters.

More about the fix in further episodes.