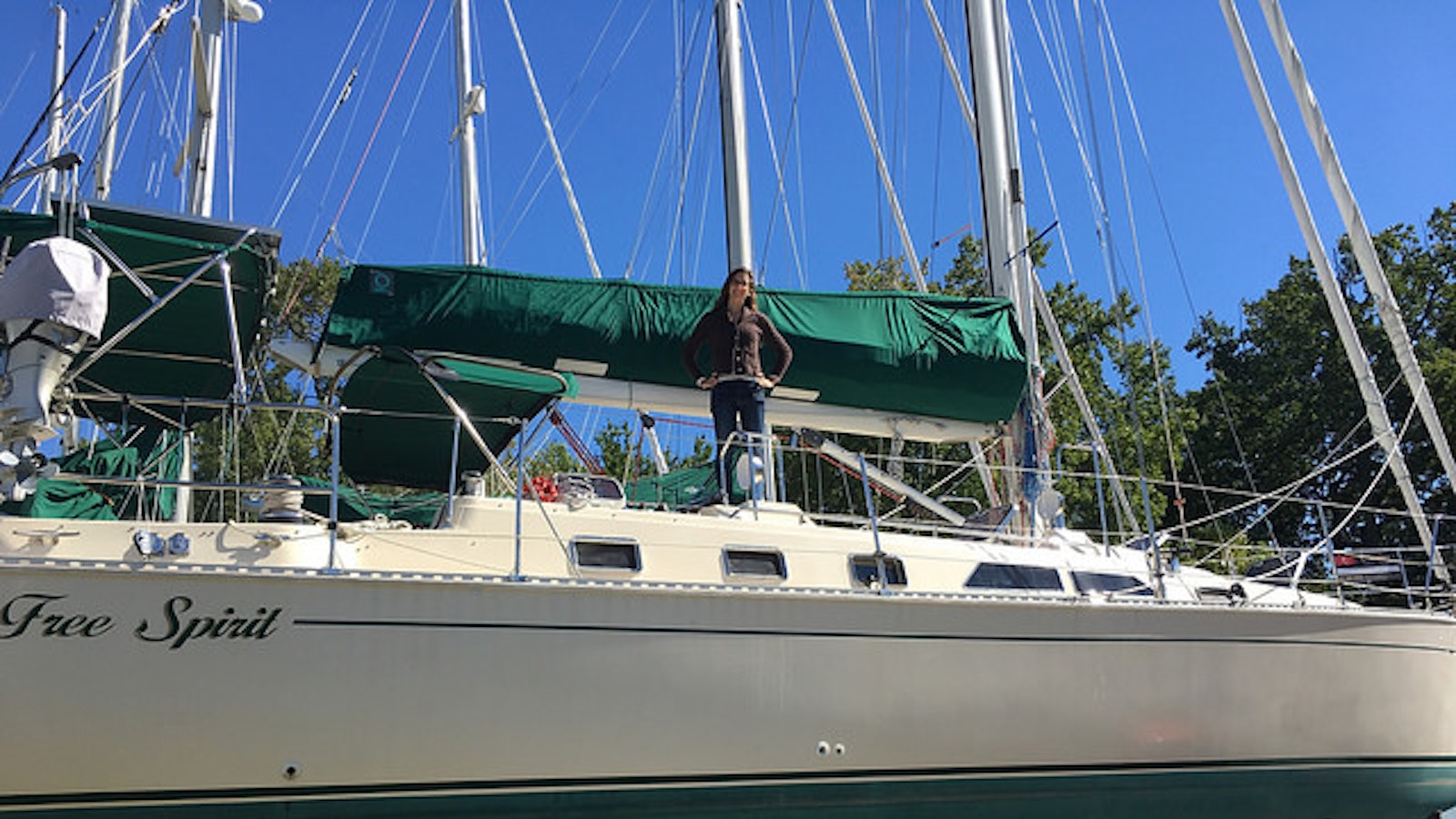 Let's start at the part where we sell our beloved OWL and buy the boat of our dreams, a swanky Saga 43. The plan is to rent out our loft in Minneapolis,  move full time to a sailboat, and travel the world. If only it were that simple! I promise you the long and arduous process would make a very boring story, even with the best writing, so I'll spare you. Instead I'll start with our arrival in Annapolis in January 2017.

The Saga 43 named Free Spirit was located in Annapolis, Maryland when we purchased it. Annapolis is a traditional eastern town filled with nautical flare. The streets are narrow and some made of cobblestone. It's the perfect place to be when your head is romantically filled with sailing. 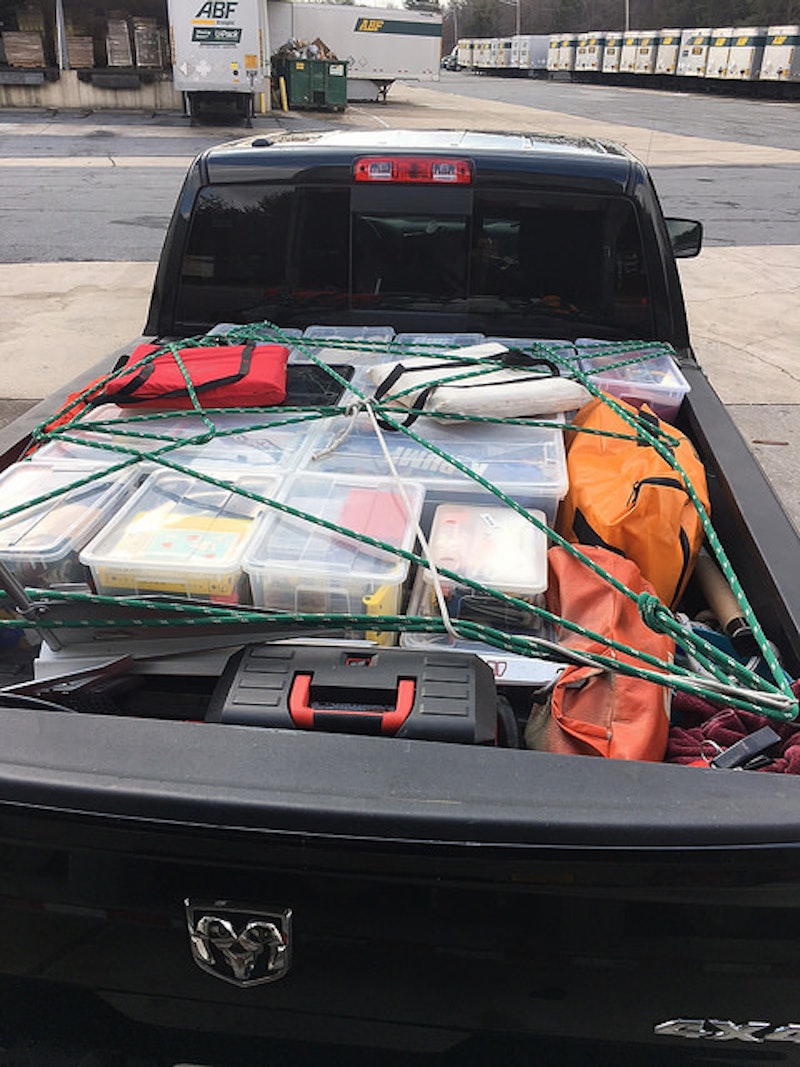 Moving day was more like moving week. We flew to the boat in early January and had our belongings and boat equipment shipped via land. This was necessary due to some hazardous items. We had rented a minivan to pick the things up from the freight terminal but the rental agency made a mistake and didn't have a minivan available upon our arrival. Rev was pretty disappointed as she wanted to be like her Uncle Steve and have a minivan. I was relieved because I was convinced that our things wouldn't fit in a minivan. They did, however, fit quite nicely in the truck.. I feel I've described moving day enough because the rest was just us grunting and moaning about how messy it is everywhere. By "us" I mean me. Also, it was cold. 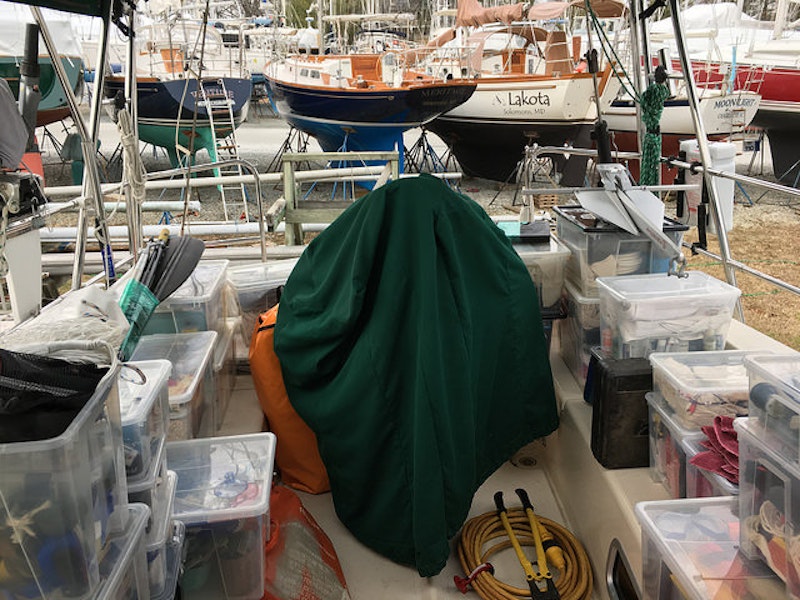 Days and days of the cockpit looking like this. 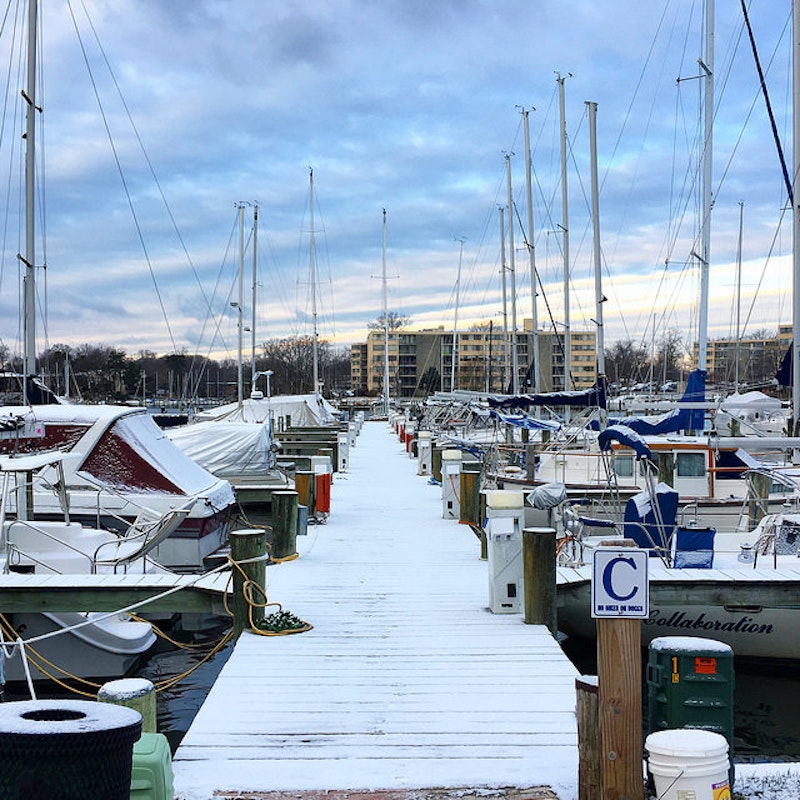 We splashed the boat (launched it) January 9th. It was 25 degrees F and it had snowed the night before. This was not our first experience with those launching conditions, as Owl, our previous boat had a knack with going in the water in the snow. I swear that 1984 beamy dog of a boat preferred it! We stayed overnight on the docks and prepared to leave the next morning. Preparing to me meant finishing up on cooking a stew we could eat for the entire week. Preparing to kai meant making sure all the infrastructure and systems of the boat were in order. Priorities.

Most of the boat systems were still winterized. Our chichi Electroscan toilet worked but we had no running water and no heat. How cold could it get on the Chesapeake in January? We're hardy Minnesotans (albeit a little scrawny) who can nasty our way through any arctic situation just fine. Also, we were certain we had enough wool and down-filled clothing to survive. 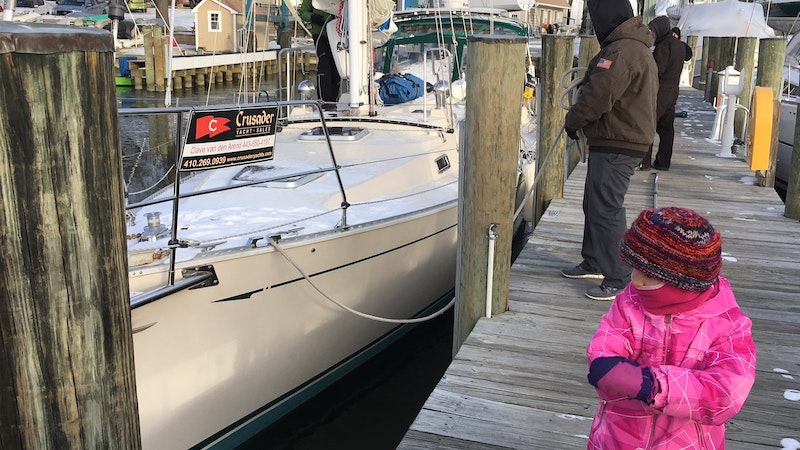 Rev's over the cold.

We awoke January 10th and gingerly unplugged from shore power after starting the engine. We had some concerns that it wouldn't start but it did without issue. The boat ahead of us on the dock was a brand new racing sailboat. It was quite shiny and I knew if we had a choice between hitting it and the dock, the dock was the one to hit. Being the first time either of us had driven the boat, we were both on high alert.

The deck was covered with an icy snow and I crawled, nearly on all fours, to the bow with my boat pole. I was ready to fend off the other boat should we discover we're terrible at managing the extra 11 feet and 20,000 pounds. This is when Kai shouted, "We're not moving!" I immediately thought he hadn't put the boat into gear, but he did in fact. Upon further inspection I realized the water had frozen around us. We were in the grips of the glacial waters and old man winter wasn't going to let us free without a good scraping of our oh so pretty bottom paint along his scratchy ice beard. I had been so fixed on not hitting any other boats and maintaining our depth that I didn't think the water would be SOLID! I feverishly poked through the ice with the boat pole. Thankfully the ice was thin and our force combined with my smashing skills (it was mostly my smashing skills) broke us free. Being iced in on the first day of our journey is good luck, right?

After escaping Port Annapolis, we were greeted by some real squares. Waves. Square waves. The kind of waves that make you wish the sea gods would descend with giant irons and flatten those knockers out.

In all the production of undocking the boat for the first time and the previous production of putting on as many clothes as I do for a good old stroll through the Minnesota woods on a blustery winter day, I forgot to take my seasick medication. This is also the part of our journey where I eat a spicy meat stick (my favorite provision) for breakfast. I know you're connecting the dots!

Ten minutes into motoring full boar into the 15-20 knot winds with the squares under our belly, Rev had already abandoned cockpit and chose to cocoon herself in her room under 2 down comforters. We had been sleeping like sardines in her aft cabin, sharing body heat and lots of kicks in the night (body heat provided by me because I donned wool from head to toe, and Kai simply wore his underwear).

I announced to Kai that my insides were feeling a little rearranged and offered to drive so my mind and my insides could kindly coordinate themselves. Five minutes into driving and I knew I was at the point of no reversal. Not an hour into our trip and I was going to quite literally lose my meatsticks.

"Where do I puke, Kai?" I asked. Per usual he didn't trust that I was already at puke point. The fact that, when surrounded by water, I had to ask where to puke should have been the first indicator that my body was in a severe state of upside down; so severe I couldn't garner puke location information myself.

"Into the water?" He answered. Duh. I went off the back and swiftly emptied my insides. What I hadn't thought about however, was that our new deluxe boat has a reverse transom, which means the back of the boat has a slant to it, in which it extends further back beyond where I was standing in the cockpit. Yep, meatsticks all over that transom. Sorry Free Spirit. She's just trying to battle waves, slapping her seaworthy belly over them and here I am puking on her. Luckily she hasn't held a grudge on me thus far.

The rest of the story along the Chesapeake can be best told through photos, as it was pretty much just motoring and adding sails as we motored. Sure Kai dropped a sandal of mine off the boat and we had a chance to practice our man overboard skills, but other than that the photos will do. Don't worry, the sandal was rescued with my sweet steering skills and Kai's finely tuned netting skills. 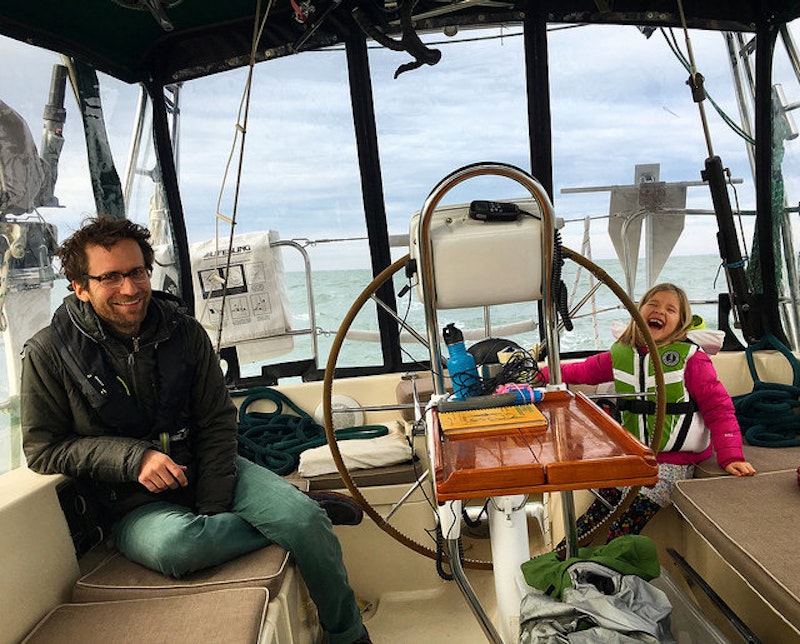 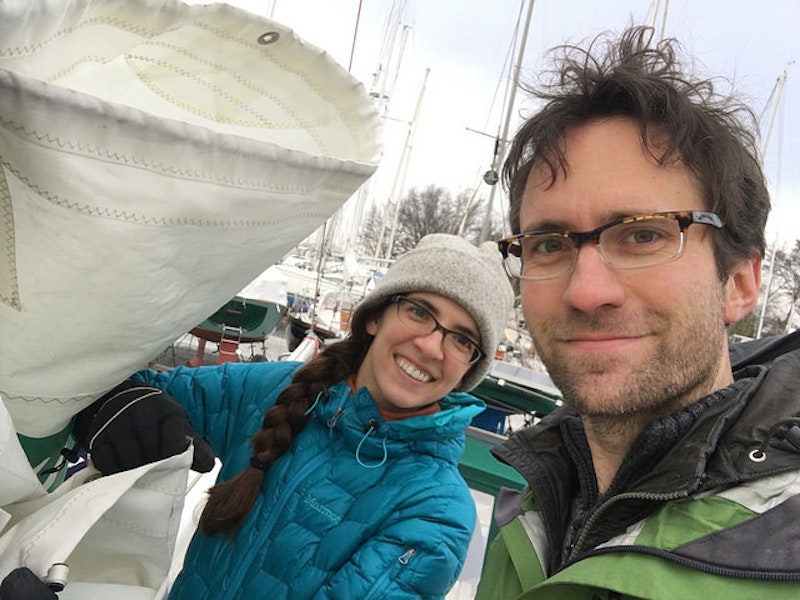 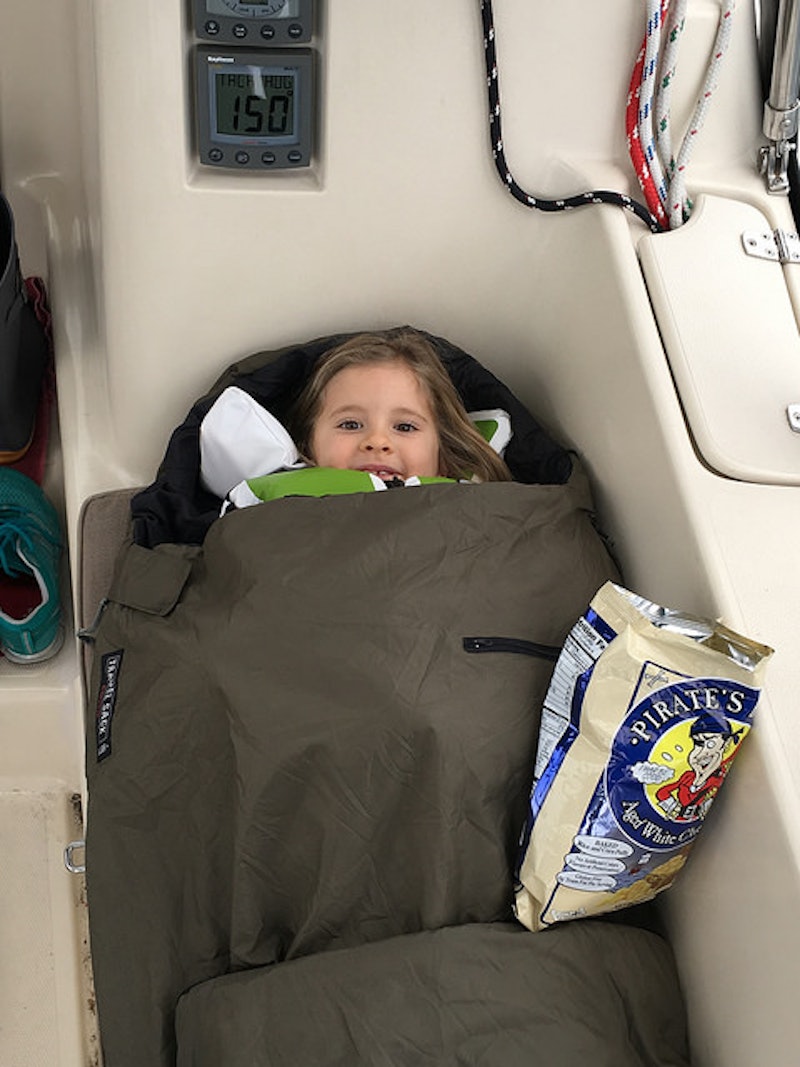 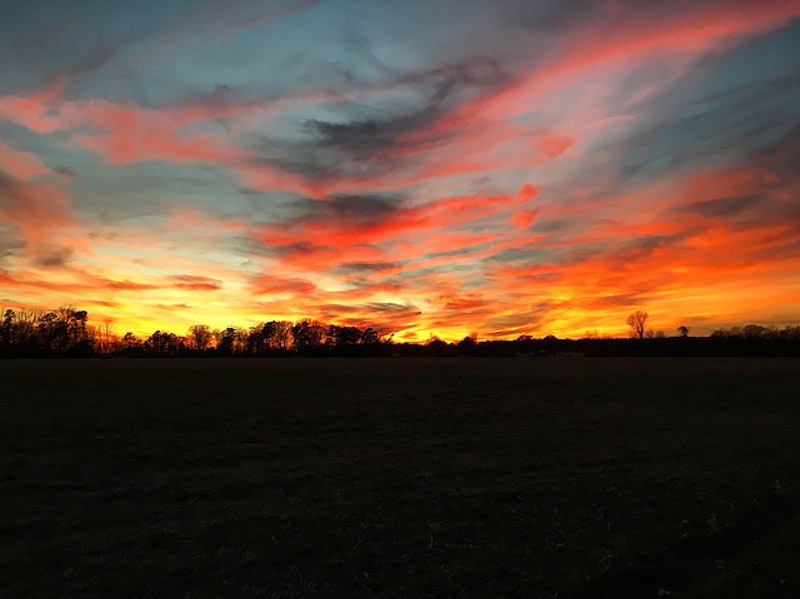 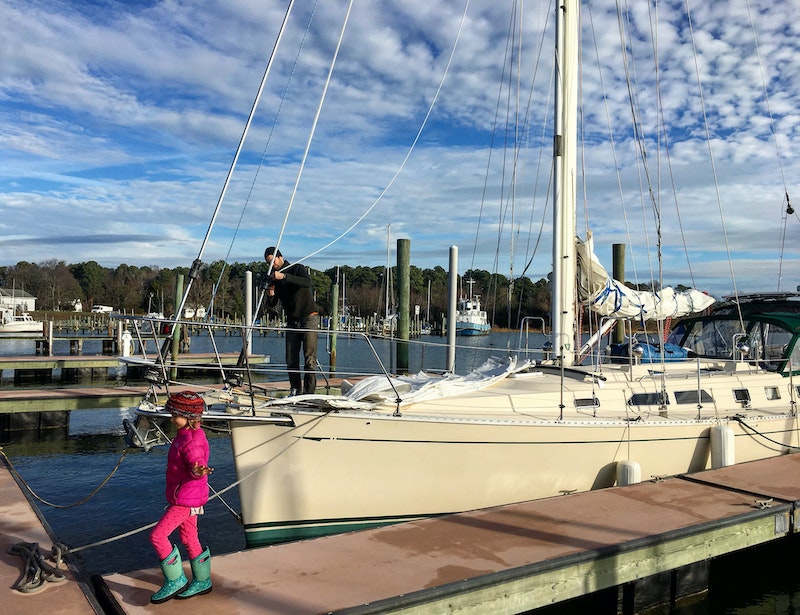 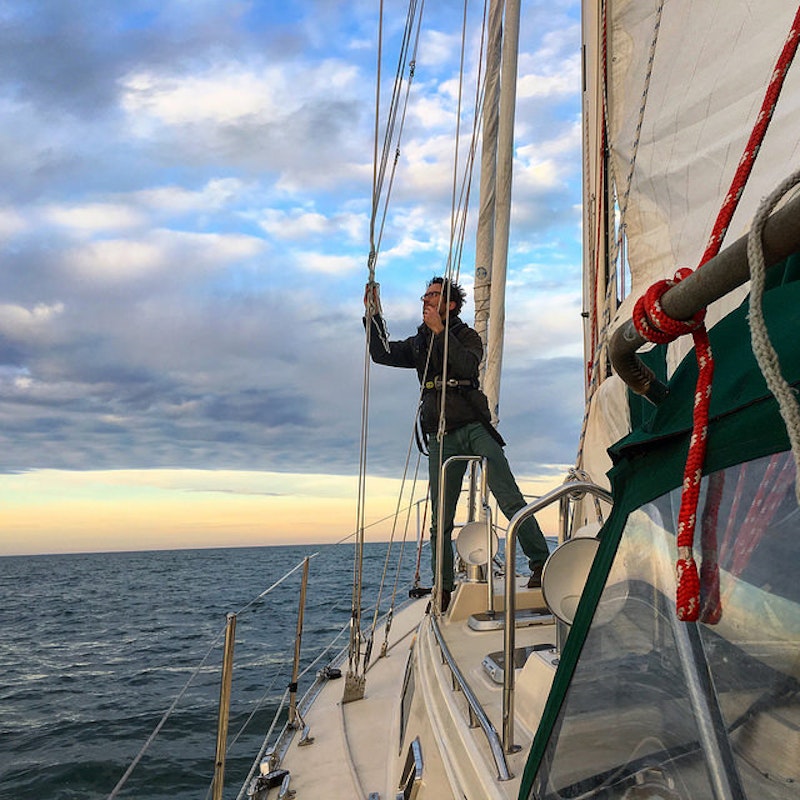