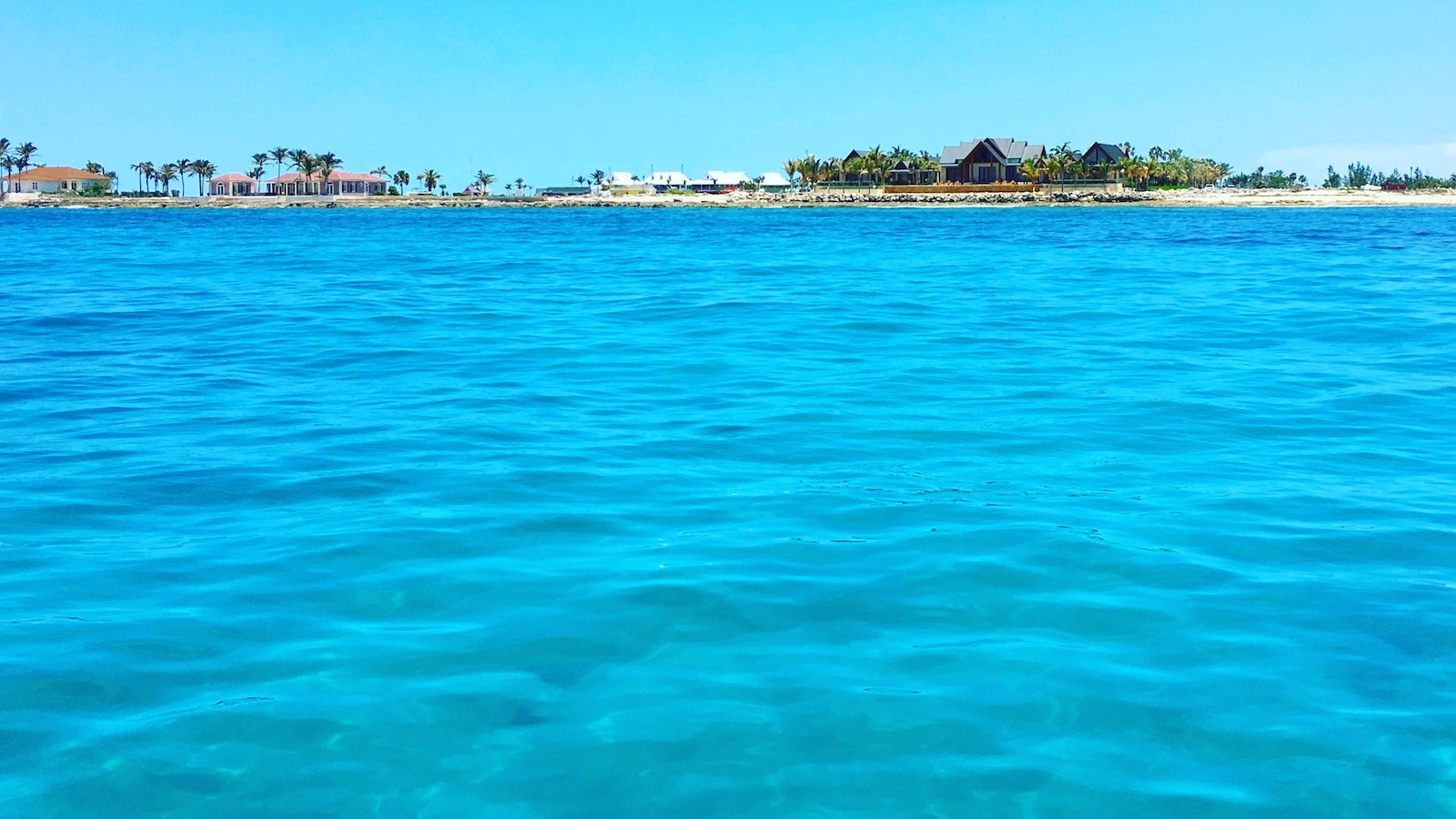 After preparing feverishly all day, we left Lake Sylvia, Fort Lauderdale, Florida at midnight, prepared for about a 12 hour sail to West End, Grand Bahama Island. We wanted to make sure to have plenty of daylight when we arrived to check into customs and find a place to stay for the night.

There were countless chores to do before heading offshore such as putting our new dinghy on deck (dinghies are best lashed on deck instead of towing or hanging behind the stern on the arch), putting all the tools and items away (for future information, this basically takes longer than it takes to sail across the Atlantic), and general stowing of anything that could fly around and break something or someone. My kitchen was spotless, just the way I like it and just the way it so very rarely is with all the baking and feeding of my hungry crew that occurs. Sailing apparently makes one as hungry as bears in the springtime and such hunger is rarely satiated.

At 10 pm, the kid was still awake and I was growing tired and weary that we’d leave at all. But there we were just a few hours later: the kid snugly tucked away in her berth and the only boat going under the lift bridge at midnight in Port Everglades. Mind you, for the first 15 minutes after pulling up the anchor, our navigation lights didn't work. These are the two, strangely tiny on all boats in my opinion, red and green lights on the bow that help other boats see us and our direction. After lots of flipping of switches, Kai went to the default troubleshooting solution when things in this boat have gone awry: jiggle some wires. He went to the anchor locker (where we had been moving things around earlier and probably wiggled some wires out of place) and wiggle waggled the wires into lighted submission. Wahoo! We were on our way!

My mind was frantically going through the checklist of things to do before offshore passages and my body was saying go to bed! Now! (I was also thinking of when I would make my next loaf of bread while underway, because that’s how I work).  I can’t drink caffeine so I grabbed some chocolate to see if that would be just the tiny trick to make my body think I could stay awake. It worked about as well as opening a coconut with my teeth.

Once outside the entrance we began the enjoyable flip flopping of either being on watch or trying to make 1 hour of sleep feel like 3. Funny thing about sleep: no matter how you do it, the length is the same. In the cockpit, crammed next to a sweaty kid in the aft berth so you can hear if crew falls overboard, in your clothes, naked, it’s all the same. Only sleep deprivation would make me think that environmental factors would change the amount of sleep I’m actually getting.

Somewhere in the Gulf Stream, while trying to keep my lead-filled eyelids open, I was reminded of being a new mom. I’d try to stay awake during nighttime feedings with Rev (which were, no joke, every hour on the hour) and I’d suddenly wake up with a baby in my arms not knowing where I was or how I got there (both literally and metaphorically). Similarly, in the cockpit, I’d check the sails, check the chartplotter, check the horizon, sit still for a minute, and then suddenly wake up with the bang of realizing we were crossing the Gulf Stream headed to the BAHAMAS! Each time I had this realization, the fact that we are moving our entire house and family to another country overnight hit me with the force usually reserved for firecrackers and other explosives.

The winds calmed but the seas rolled on. I had little effects of any seasickness beyond tiredness, but that was probably due to being actually tired and not just a seasick survival mechanism. Unfortunately I can only speak for two-thirds of the crew. For the second time ever in our sailing experiences together, it was Kai who was hanging off the stern heaving. I think I woke up and asked if he was okay and that he should drink some water, but Im honestly not sure how the interaction went. I do know that whatever happened woke up a very giggly Rev who was a little too elated to hear the sounds of insides emptying.

The mind fog lasted the entire next day, but we garnered enough energy to yell, “land ho!” upon seeing West End!  We were beyond excited to explore new lands. We raised our yellow “quarantine” flag (which means we can’t get off the boat until we clear customs), called to the customs office, and set anchor outside West End. The holding was terrible and had to let out a monumental amount of chain to compensate for the anchor not being “set” in the sand.

Kai took the dinghy with our papers proving our citizenship and the boat’s registration into shore while Rev and I cleaned up and organized the boat, and kept watch for anchor dragging. I’m not going to lie: The intricate details of this meant sitting in a messy cockpit and eating my favorite “vacation” food of rippled potato chips dipped in sour cream. Since we’re on a perpetual vacation, it’s hard to tell when to stop eating them, so we plowed through half of the bag before Kai returned.

Kai soon arrived with news of clearance to enter the country and we proudly raised the Bahamian flag (don’t worry mom, the American flag was also flying), which means we were safe to go ashore. He then, promptly fell asleep.  Later, I peeled him off the settee and announced we were going to shore to see if we could find a place to buy a SIM card so we could access Bahamian cell phone service.

Finding it was too late to make the 17 mile drive to the nearest BTC store, we toured the grounds of Old Bahama Bay Resort. The pool, beach, showers and other facilities were basically open to anyone, probably because the only people around are marina or resort guests. 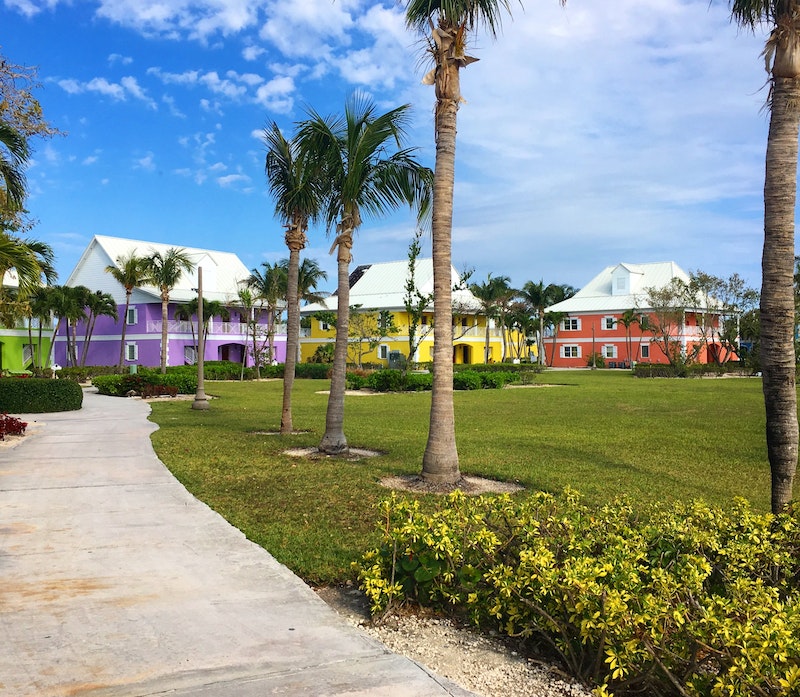 We walked to the Tiki Bar and found it was closed, but a resort staff member asked if we’d like to try a drink. The ease in his delivery of his question made it sound like he was giving something to us for free. We were naive, sleep-deprived, and in a state of general zombie stupor, so our wits weren’t all there. He mixed a traditional Bahamian drink of coconut water, sweet and condensed milk, rum, and nutmeg. He popped a straw in the glass and said, “that will be $9.” I’m positive my eyes popped open in surprise but I was too tired to argue and kindly handed the man $9. A little rum goes a long way when you’ve been up all night and spent all day in the sun. Kai and I lounged on chairs and shared the sweet, cold drink as Rev waded in the pool as if we were refined guests at the resort. After we had sufficiently squatted, and been sufficiently swindled, we bumbled back to the dinghy and went promptly to bed.

The next morning we called a cab and told them we’d be in front of the hotel lobby at 10 am. We waited a bit and they didn’t arrive. The woman at the front desk of the hotel informed me most taxi companies didn’t go as far as West End, but her colleague Drexler would happily take us. I cannot say enough that I should have asked how much this would cost. Halfway into the trip he said, “you were told how much I charge right?” I said I wasn’t and asked what the charge would be. $60! We were prepared to spend about $20 on a taxi. Turns out the swindling wasn’t sufficient from the night before. After $9 on a drink, and $110 spent on procuring internet for the next month, we made a mad dash back to the dinghy and fired it over the swells to get back to the boat and get out of West End. Within 15 minutes of returning to the boat Kai was raising the sails to get moving toward Mangrove Cay for the night.