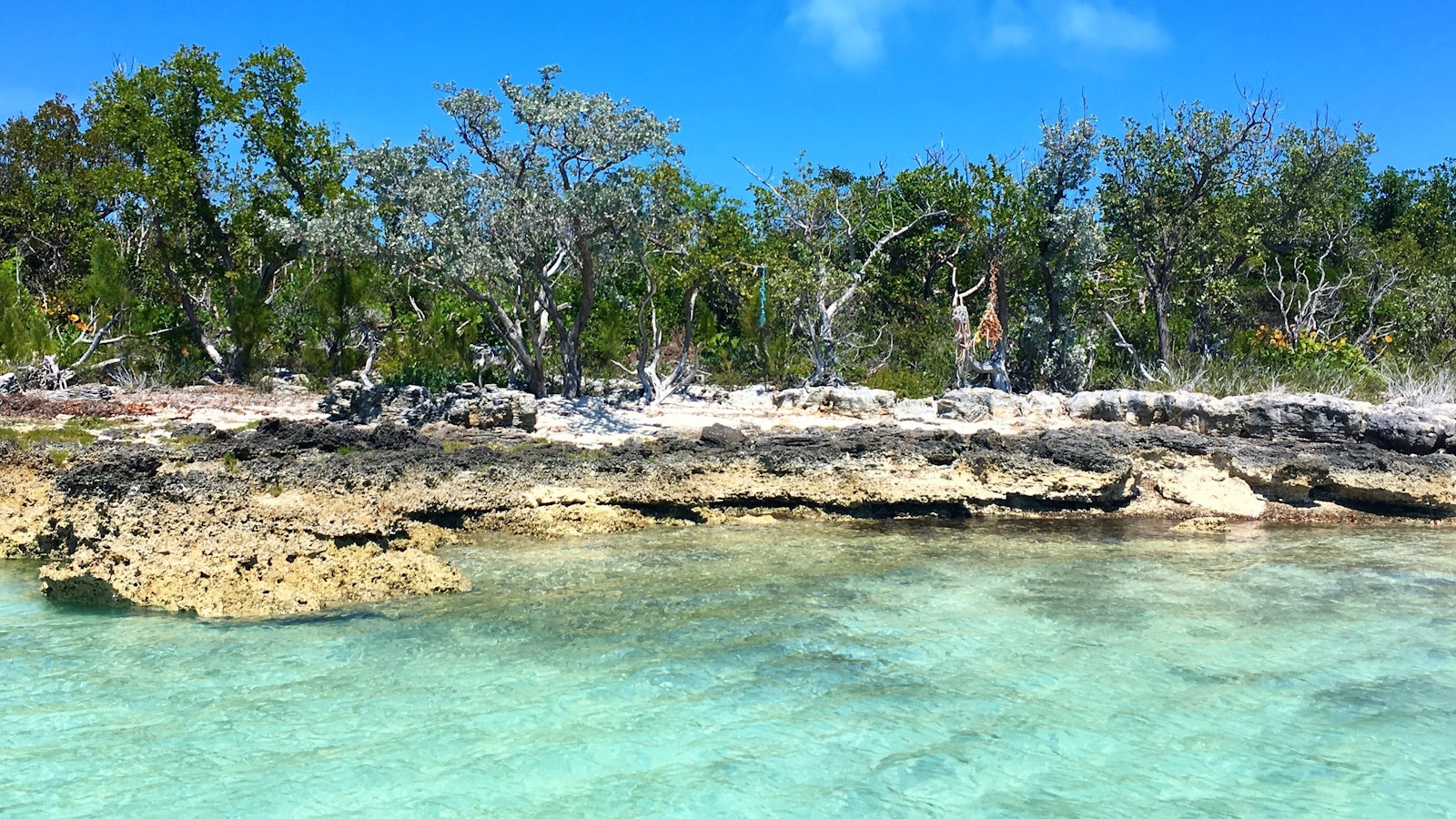 Once more, with feeling.

First, let me warn you that I cannot and will not stop marveling at the color of the sea in the Bahamas, and I will try to fit the turquoise splendor into my narration as often as possible. I can't help it. I also knew I wouldn't be able to stop writing once I started, so I hope you like reading my novels.

We planned on West End being a short stopover on our way to more remote cays, however, stopping there did allow us to see a little bit of what the locals have been dealing with since Hurricane Matthew hit last fall. Driving from West End to 8 Mile Rock (near Freeport) was a tour of the havoc and rebuilding that is still in very primary stages in some areas. Homes and small buildings are half-built, some with rubble tossed around, some cleared perfectly out and looking like someone took a hot knife and cut them clear in half; cross sections of finished homes. There are townspeople around but far too many for the amount of whole homes which I can see. We are left to assume they either live 10 people per one roughly 500 square foot house, they're homeless, or they live elsewhere.

Mounds of conch shells sit along the seashore in the fishing village, their guts ravaged to harvest the popular conch meat served at restaurants. A conch shell would be a souvenirs to any American, but the abundance qualifies them as ordinary carcasses here.

There are no trees and the landscape is more the quality of arid desert brush than the seaside fare I'm used to (although parts of Costa Rica maintained this wet/dry relationship along the coastline). Men and women sit along the street in what little shade the short buildings and remnants thereof afford. I wonder about their financial states, wondering what kind of income is furnished with such limited infrastructure and resources. Can fishing and conch garner enough money to survive and rebuild?

Backlighting the wreckage is a natural world in technicolor. Even along a parched shore, coral and other plants contrast the aqua sea in tropical luster. At times my eyes blind and cross from the overload of brightness (thankfully Pam Wall insisted we buy polarized sunglasses), and I am reminded of a crayon I used to adore called "aquamarine." I'm pretty sure this is what my little piece of dyed wax was trying to replicate from the landlocked Midwest. Much like waves, the radiant blues are elusive to my camera's lens, showing up as much less astonishing in pixel form. I am reminded again that nature can often preclude technology. Alas my chronic tales of blue waters are warranted without satisfactory photographic portrayal. 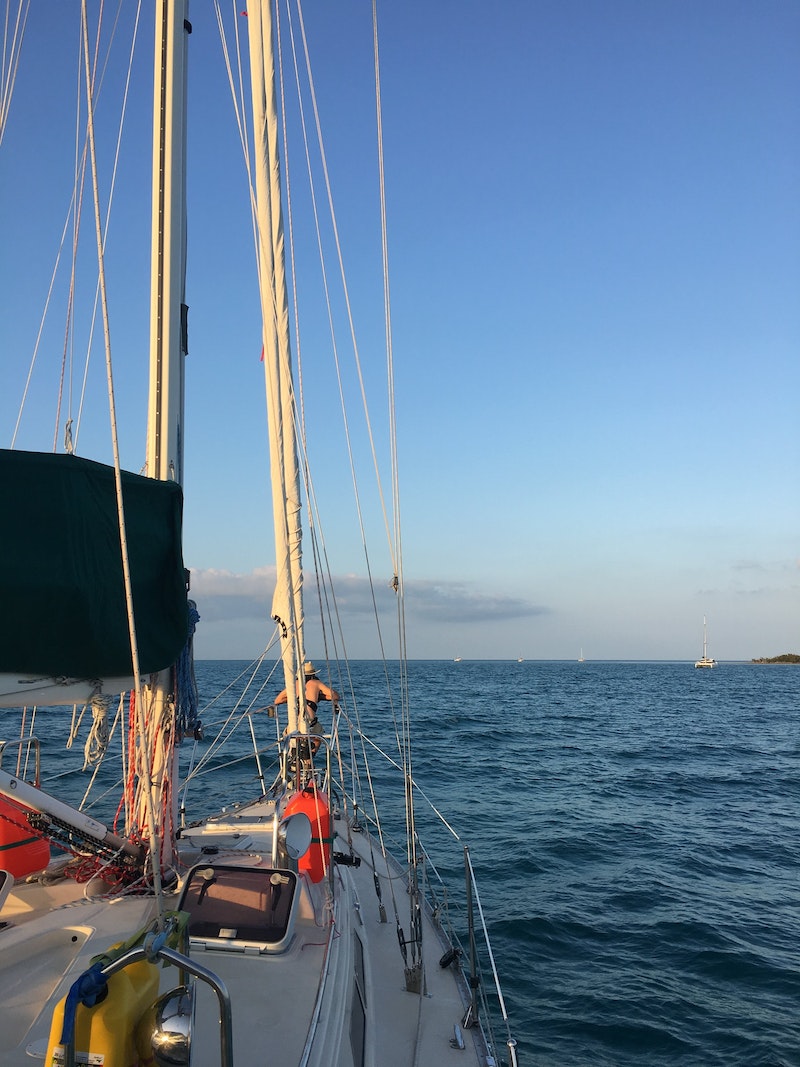 Leaving West End, we headed north toward Memory Rock, passed through the cut lined with shallow rocks,  and headed east toward Mangrove Cay and the other more remote cays. After over a month in Fort Lauderdale, we were ready to return to a place that felt more like our previous sailing home in the Apostles. We're used to being the only boat in an anchorage, miles away from civilization, and we actually prefer it to more populated places that might have more amenities on shore. 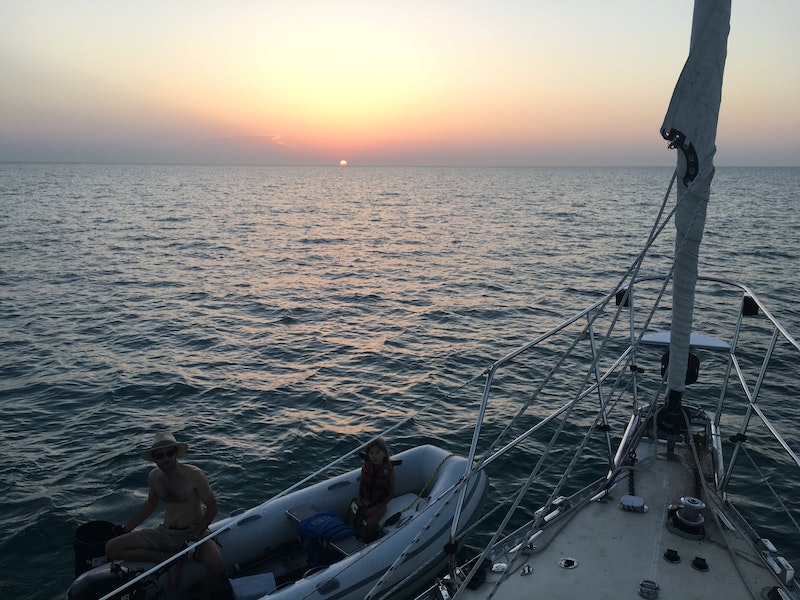 Once at Mangrove Cay, my first observation was the lack of sounds beyond those of the water. There were a few boats around us but the vast quietude was matched only by our experiences on the outer islands in the apostles. My favorite, South Twin Island had a way of surprising me with its silence each time we'd arrive, and Mangrove Cay was similarly impressive. The sun was setting as we let down the anchor, something I've been managing on my own as Rev and Kai scope out the depth in our dinghy. I'm becoming thoroughly spoiled with this contraption called an electric windlass which lets the anchor down automatically with the push of a button on a remote straight out of 1982, all while at the helm. The once arduous task of manually feeding out the anchor and chain from the bow while carefully protecting ones digits is that of the past and I'm thrilled with our new system. It is one of the many little things about this boat which makes me fall in love with it over and over again.

Beyond Mangrove Cay we sailed straight east for 20 nautical miles arriving at Great Sale Cay (which is actually for sale, all 370 acres for a cool $9.9 million). The winds were just off our nose, blowing 20 knots. I luxuriously made breakfast, cleaned the kitchen from the night before, and prepared food for later without a touch of seasickness, something that's never happened even if I had taken medication.

The point of sail is somewhat notorious for making me nervous, as with Owl, each gust when headed into the wind would cause heeling over and leveling out. With each heel my body would send an alarm of danger through my blood. The Saga doesn't waiver in the least. Sure we heel over, but once we're over, gusts don't really bother her. Granted the intensity of heel will match the wind speed to a point. As we sailed, full main and jib flying, Kai would shout, "gust!" to prepare me as he did in Owl, and then we'd laugh at how the boat didn't flinch in the face of a few extra knots of breeze. The ripples on the water along with the wind instrument proclaimed a gust but one would be hard pressed to notice. We marveled at how the boat was performing, proving form really predicts function. Sure our boat may have a deep keel for its size and be notably narrow at its beam (widest point), causing us to have a little less interior space than other boats our length, but it can go into the wind with ease and stature. There really is no substitute for draft (deep keels baby)! I couldn't be more pleased with its performance. Also, that jib that was at the sailmaker for weeks getting adjusted seems to be mostly fixed, at least until we get some dreamy Carol Hasse sails. One can always dream.