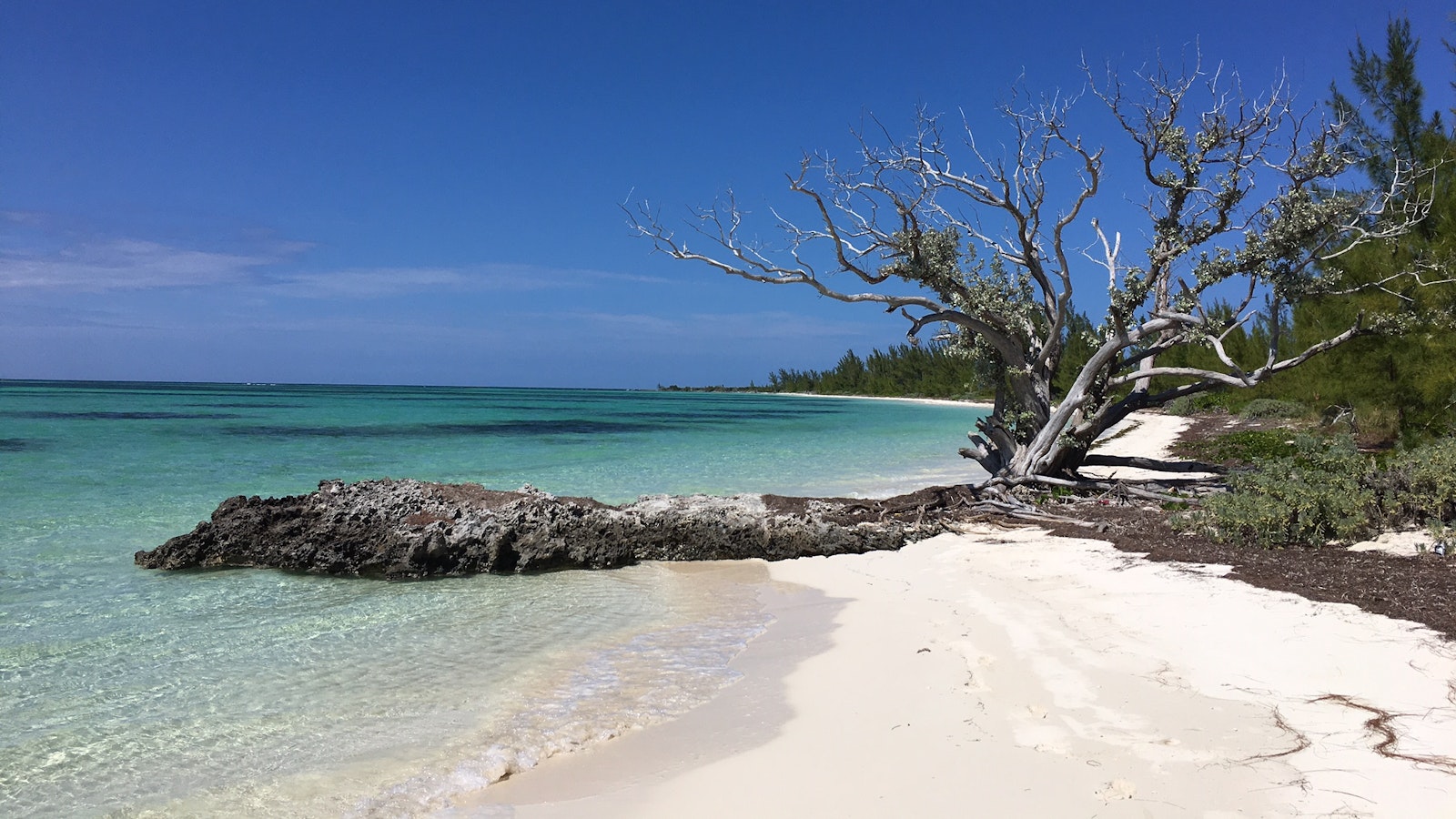 I know, I know. I haven't kept up a good account of the places we've been on this blog. I've started writing a post about a typical day for us, and in reflecting, it feels as though we're nearly as busy as we were prior to living on the boat. The busyness (minus Kai's work) is a different kind of busy though. We have things like sailing, boat chores, maintenance, planning, and exploring to do in addition to all the usual activities in a day: cook, eat, groom, school (which for us is drawing, writing words, and listening to stories), look in the mirror and sing Moana songs (the mirror is critical to this activity and this is mostly a Rev thing), and play.

Those things have kept me from writing as much as I've liked, but hopefully I can make a good summary of a few islands or "Cays" so far. We're currently at Man O War Cay and this account is from a few weeks ago:

We left Mangrove Cay for Great Sale Cay. The western side of Great Sale Cay has a long, easily approachable anchorage with protections from the north and east. If winds are from the south, the northern side of the island can also be used. We anchored toward the south of the west coast and had even had a little cell phone reception with our booster. We stayed here a few nights waiting for winds to shift and also doing boat projects that involved Kai spending entire days in the engine compartment fixing the plumbing to the watermaker.

On the last day there, our ears perked up when we heard our friends from Lake Sylvia on the radio. Not one, not two, but three kid boats were on their way to our anchorage! Kid boats have been like days of rest: few and far between yet glorious. I'm quite positive I enjoy meeting other families more than Rev enjoys kids. I am full of questions and curiosity about what they're doing and how they do it. I probably pry too much but I'm genuinely curious as to what makes these cruising families tick. Or maybe, I want to elicit some morsel of validation that we're doing the right thing for our kid. I want to dig up a gleaming, starry, aha moment that further cultivates my fervor for this way of life. Usually spending time with other families does just that.

We went to the beach with the other families. The moms talked provisioning and the dads went lobster catching. The kids swam and played freeze tag, a game I had no idea Rev knew how to play. Maybe all kids come preprogrammed with quintessential kid games? 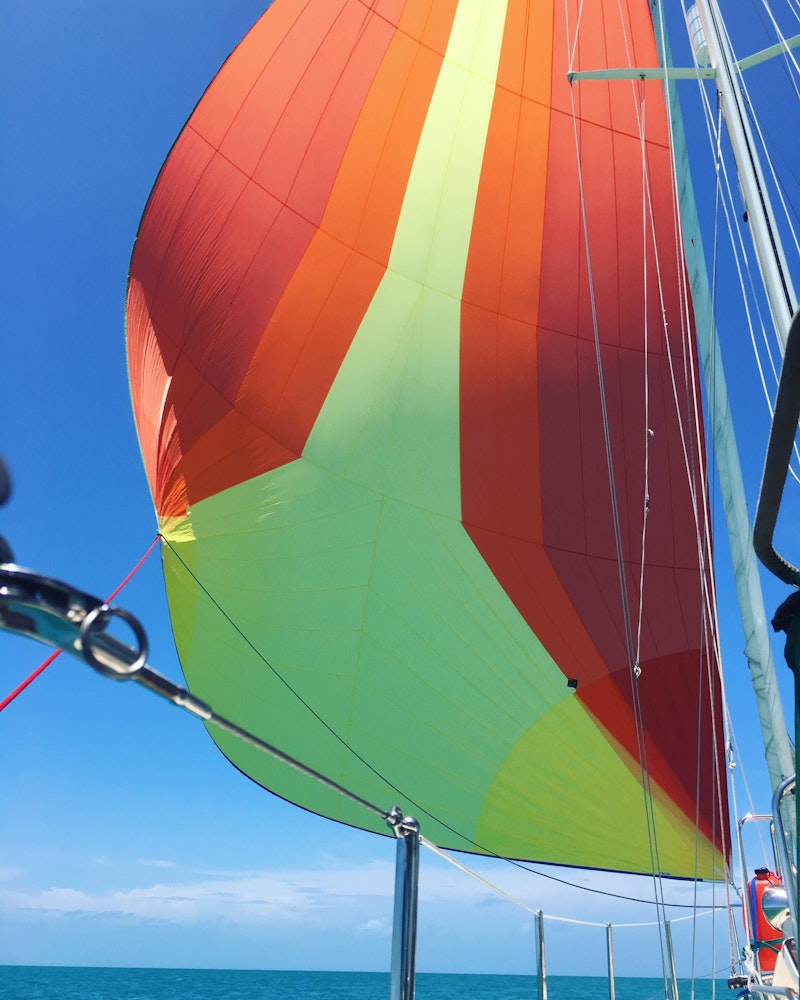 The next morning we headed north to Grand Cay. Originally we wanted to anchor off the Double Breasted Cays but a strong south east wind with storms predicted left us looking for a non-lee shore. We opted to try to get to Wells Bay, on the north side of Grand Cay. Just a hop, skip, and a jump around some shoals and rocky areas. No problem, right?

Kai leapt into the dinghy with technology (VHF radio, sonar, chartplotter and iPhone for recording the track) in hand and sped off in the "car" to decipher the rocky underbelly. With the tide dropping rapidly we had to make way quickly. Our charts said one thing, Kai radioed another thing. We talked back and forth for a bit. We ran aground. That's right, the skinny girl dug her long fin into a nice sandy shoal and leaned over a bit, dusting the surrounding waters with a bloom of sand. I may have screamed into the radio to Kai, "I'm aground!" holding the radio in my left hand while throwing the shifter into reverse with a swift flip from my right hand. The boat had enough momentum that the reverse (and the sand bar) pulled it sideways, then backward, spinning a nice 360 degrees. She really nailed the dismount. I'm pretty sure if she were ice skating it would have been a clean single salchow. You should have seen it. Also,  it's a good thing I'm such a great driver and kept as calm as possible (which is actually more calm than you're imagining). 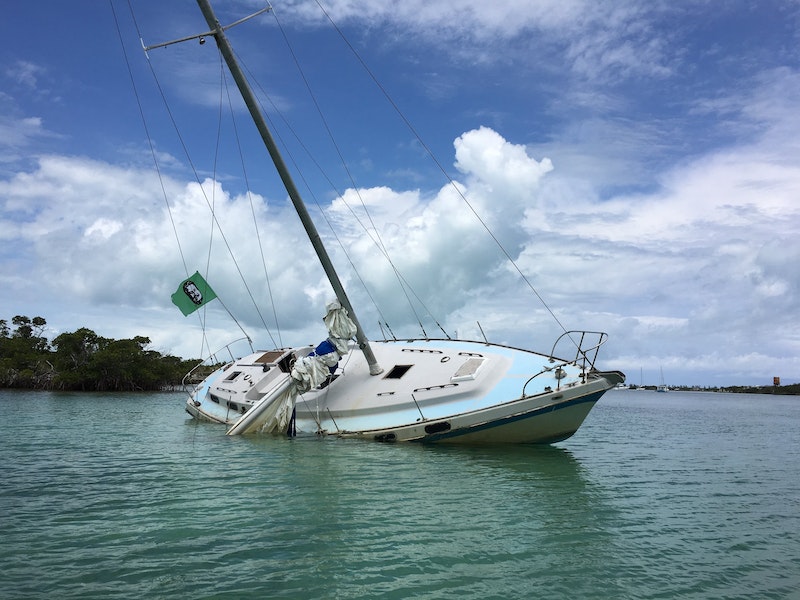 We were glad we didn't run THIS MUCH aground.

We narrowly got through the sand and rocks but the excitement wasn't over yet. 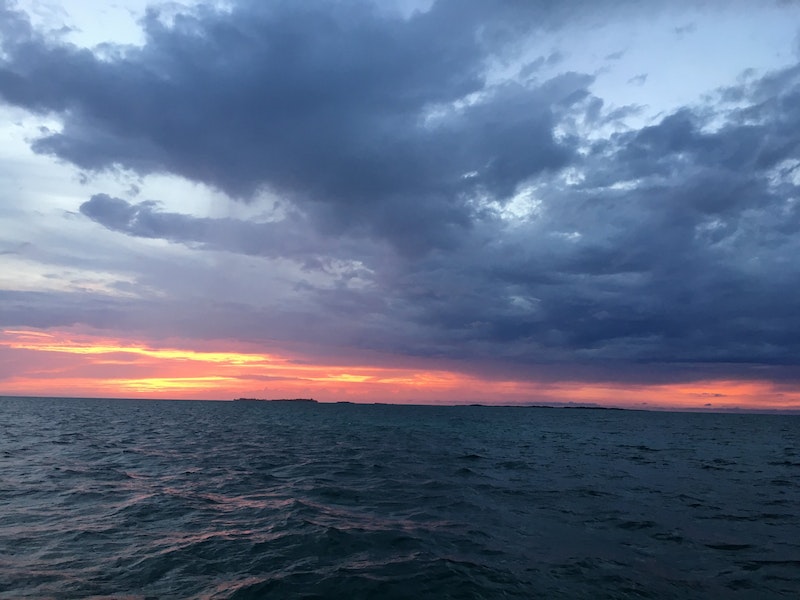 View from Wells Bay at a stormy sunset.

Finally anchored in Wells Bay, we found a beautiful beach. Tired from wayfinding through the reef and buttoning up the boat in preparation for a storm, we ate dinner (which consisted of a bunch of cans opened up, mixed together, and heated because I was exhausted), and heard someone calling, "SOS! SOS! Can anyone hear me?" Now I've listened to enough of Police's "Message in a Bottle" to know what SOS means. When nobody responded to the man on the radio I did. We had eves dropped on an ample amount of Coast Guard calls in Lake Superior to know how this goes:

Me: "Vessle in distress, this is Free Spirit, what is the nature of your distress?"

Me: "Roger, what is your current position?"

Me: (after repeating the coordinates) "Can you give me a description of your vessel?"

Me: "How many people are aboard your vessel and does everyone have life jackets on?"

SOS guy: "4 people. We don't have any lifejackets."

Revs face turns from edge of her seat excitement to horror. Who doesn't have lifejackets aboard?!

And this is the part I've always wanted to say:

Me (in my biggest, clearest coast guard voice) : "Pan pan, pan pan, pan pan. All stations, this is Free Spirit. There is a white motor vessel, 4 people aboard, with blue stripes and a white motor that is taking on water and has a disabled engine near Double Breasted Cay. The current location is (GPS coordinates). All vessels in the area are requested to keep a sharp lookout and provide assistance if possible. Free Spirit standing by on 16."

Within a few minutes someone answered the call and notified everyone that he would attend to the sinking vessel. Within the hour the rescuing vessel called again and notified all the concerned listeners that the vessel in distress had been saved! We helped save four people! Well, we did the easy part anyway. I'm going to count it as saving lives. 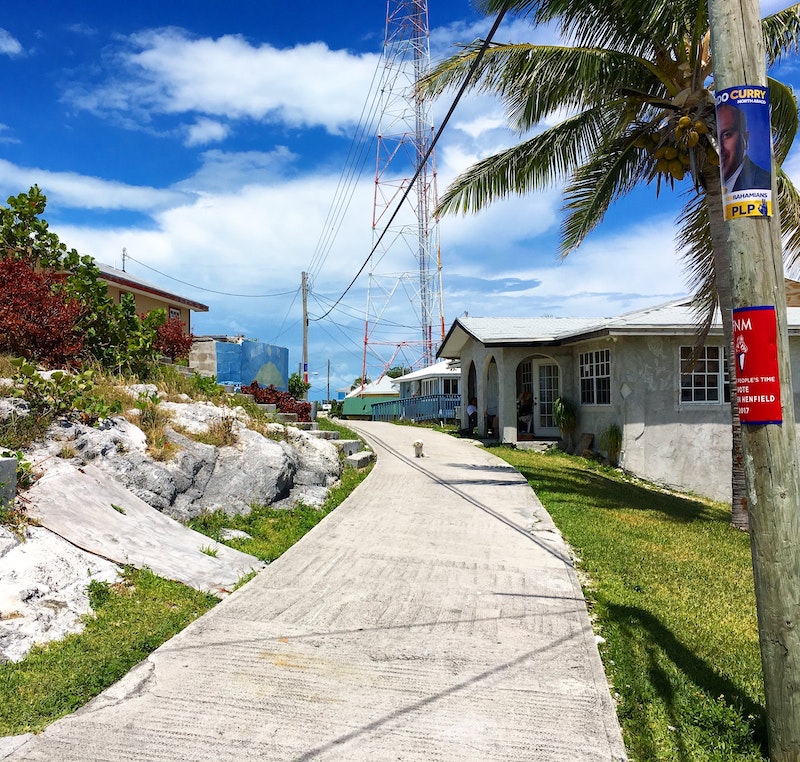 The next day we explored the settlement on Grand Cay which turned out less than impressive. The town appeared quite depressed and economically desperate. Like West End and 8 mile rock, it wasn't much more than homes and a BTC store. I was confused as to which were homes and which were shops because the shops looked like homes and the homes (like the shops) had their doors open. Without careful study of the home, one wouldn't realize that they had walked into someone's living room until it was much too late. We didn't explore much beyond looking for ice cream (which was to no avail) as we grew famished under the hot sun. I'm sure it's better there than we found, but we were more impressed by the beach than the town. We also had the sour taste of stressful navigation in our mouths from the day before which put a little damper on things. 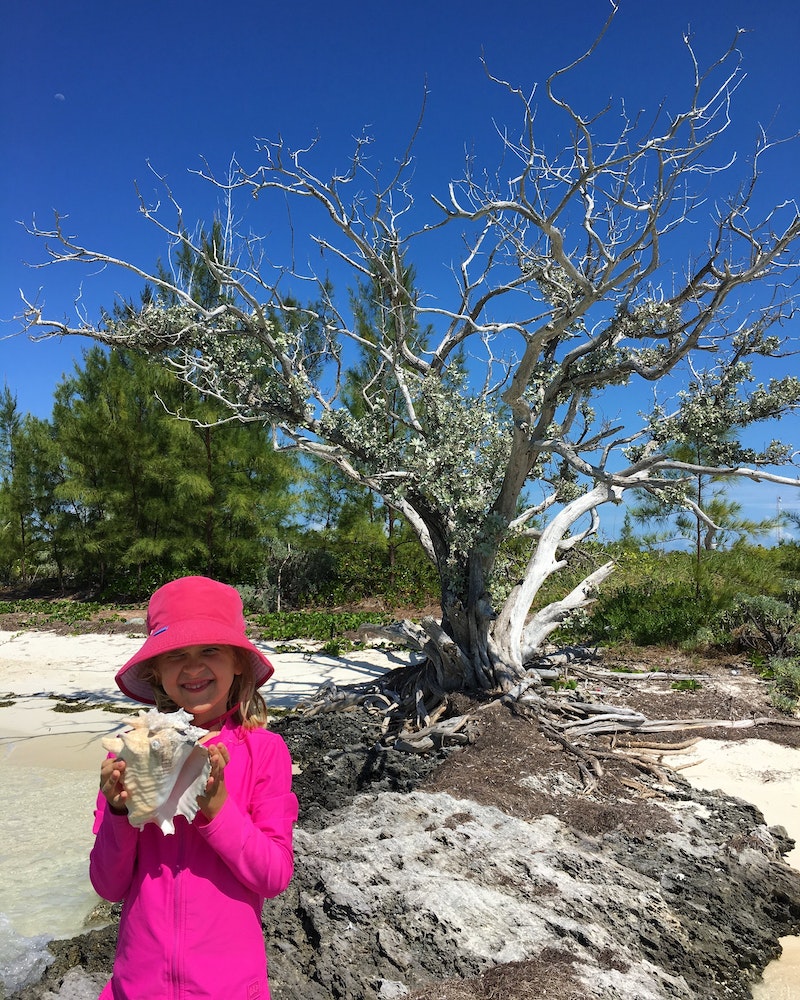 Later that day Rev and I enjoyed the beach while Kai worked. She played on her boogie board while we searched for shells and conch. The beach was long and uninhabited except for the common trash found on many beaches here. It's a curious thing how beaches can remain initially pristine yet full of trash upon a closer look. We've found a lot of trash on the beaches of inhabited islands as there isn't much to do with trash except dump it on an island or in the sea. Some islands have settlements but no landfill/dump/incinerator, or other means of trash disposal. They do have a trash boat but it's unclear if the boat goes out to sea or takes the refuse to another island that has a landfill. We've heard reports of both avenues of "disposal." (On a side note, I found a really great conch shell.)

This has historically been one of the more difficult realizations of being in another country for me. In the US we grow up so arrogantly to think that we are more advanced than other countries. For me, I assumed recycling and trash removal were adequate in remedying our waste. In my early 20s I worked at a recycling company, which both bolstered my confidence in the world and opened my eyes to the reality of waste in the world. Many of the people who have recycling accessible to them don't recycle. Zoom the lens out to include places that don't have a highly educated, progressive view on waste (Minneapolis and Saint Paul residents are quite environmentally minded) and the rates plummet. Zoom out even further to include careless large corporations and countries without infrastructure resources to devote anything to waste and the picture grows more bleak. The arrogance or even confidence that we're caring for the land obscures the state of affairs at the whole world level. I could go on and on. 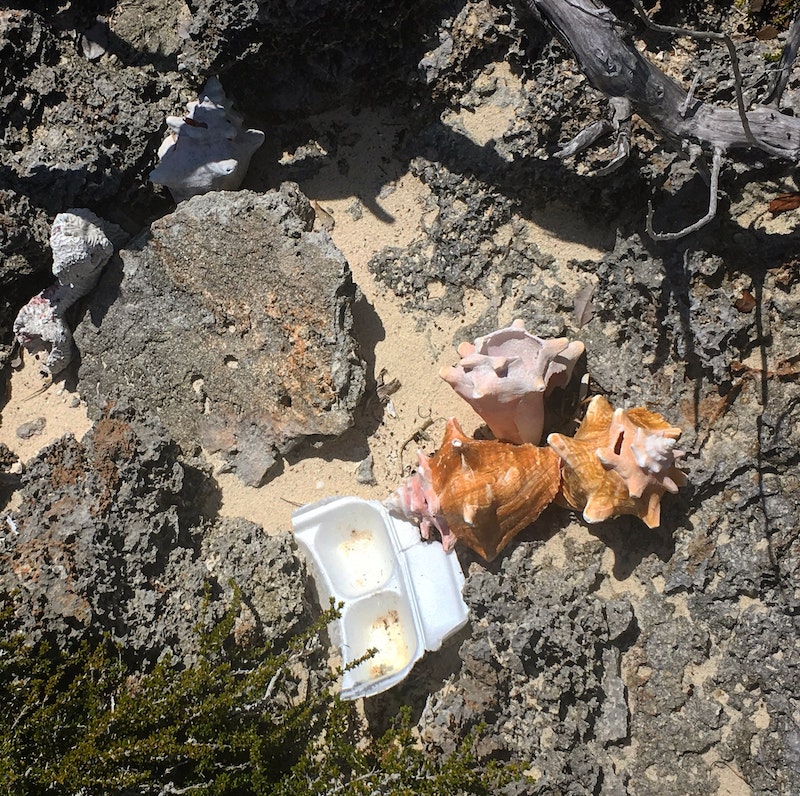 Did these conch order takeout?

Our immediate recourse for this is to keep all of our trash until we get to an island with a "landfill," and keep all of our recyclables until we return to the United States. We'd keep all the trash if possible but there simply isn't enough room (or nose plugs) available. It isn't the perfect solution and I'll be thinking of ways to reduce our waste with future provisioning. It's quite difficult to keep food fresh for long periods without the use of plastic, metal, and glass.  Maybe the solution is to cruise Europe where I'm sure they have these issues solved already?