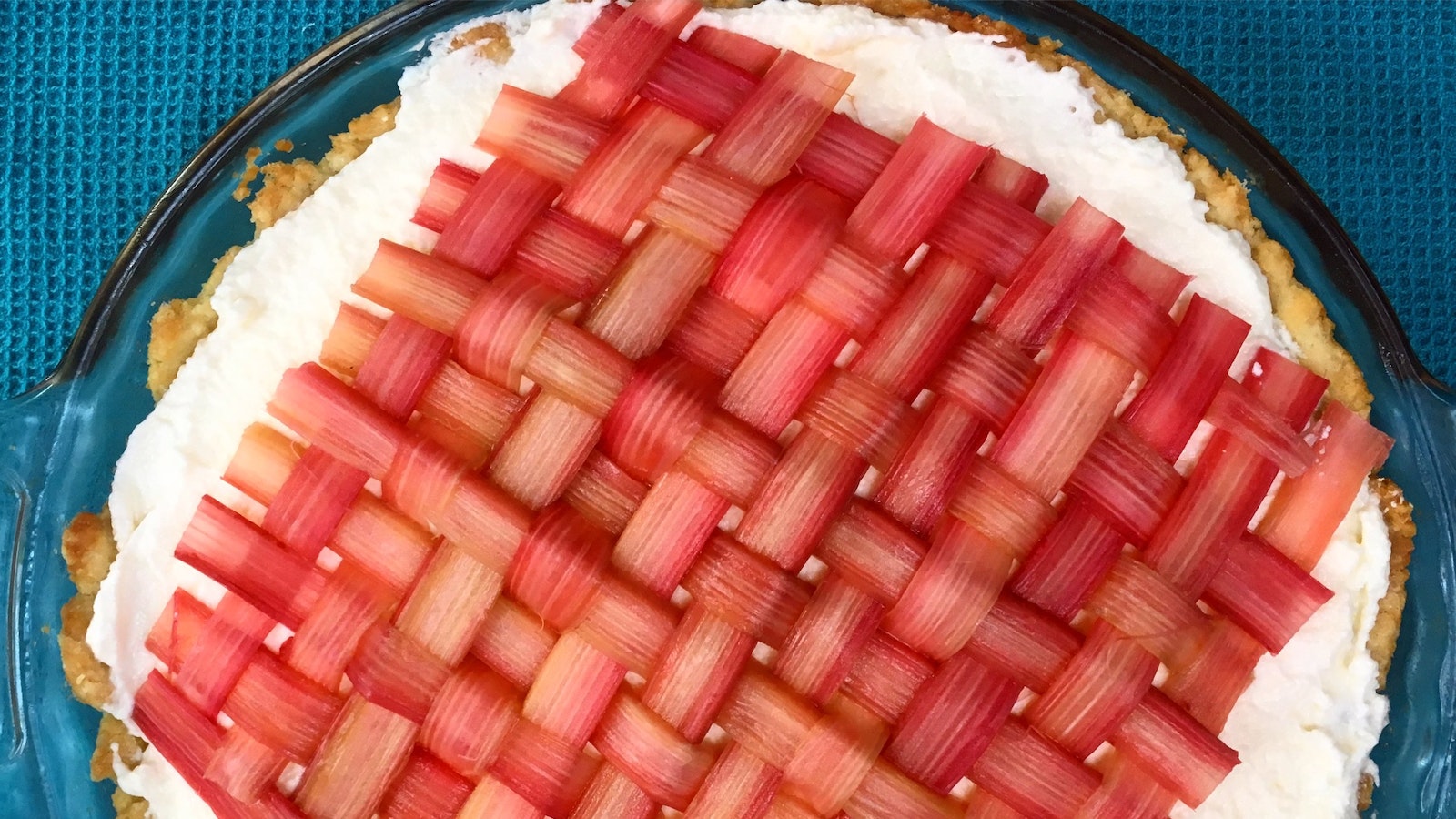 We've arrived back in the states and accordingly, one of my first priorities was to get to a grocery store. I did a mostly stellar job, if I do say so myself, provisioning for the last month and only did one grocery store run in Marsh Harbor (where the food wasn't as outrageously expensive and when grandma came to visit).  I would have been happy with a Publix but I decided to treat us to Whole Foods. I know, not the best corporation, but Florida is not the land of cooperatives, and local, organic foods aren't ubiquitous (although since it's summerland all the time here, there are a lot of local foods but they're mostly conventionally farmed).

I went a little crazy and our fridge is near bursting. When you live on a boat and you're always moving, you never know when the next convenient and decent store will be. Also Kai came along on this trip to the store which rarely happens and I wasn't about to let those arms go to waste.

It's a game of reverse Tetris to find anything in the fridge or freezer and a game of actual Tetris to put everything back in its place. "It's place" is more of a relative term. The act of finding the food item you need will subconsciously plant U2's "I still Haven't Found What I'm Looking For" song in your head. To remedy the situation, I made a pie.

It's rhubarb season and I've been hankering for a pie ever since we decided to head back north for the summer. Rhubarb is my favorite pie ingredient and my favorite pairing is juneberries because they're just a tiny bit sweet to balance the rhubarb tartness, but not too sweet to overtake the rhubarb essence. Alas there are no crisp winters to bear juneberries in Florida, and juneberries thankfully haven't broken into the commercial produce scene, so strawberries were my backup.

The pie consists of my pie crust; a rhubarb, strawberry, chia filling; a layer of whipped cream; and a topping of poached rhubarb in a lattice pattern. "Latticed" rhubarb is the spring fashion trend of rhubarb. I may have been in the Bahamas for the last month and not known what S-Town is, but I know pie trends.

This recipe is a little time consuming, at least more so than other fruit pies that involve simply stuffing the bottom crust with fruit, deciding on single crust, double crust, lattice, or crumble top, and baking it (us bakers have such decisions). I feel it's worth the extra time.

A note on the crust: I used my crust recipe that includes an egg rather than ice cold water to bind the flour and butter. This is because we had bubbled all of our cold water in the fridge at the time and our eggs are cold. If you prefer a slightly lighter crust, you can use water.

Also, I used various sugar types in this recipe (mainly xylitol and honey) but you can use any sweetener you want, just don't use any fake, chemical sweeteners and don't use a liquid sugar for the crust.

So, without further ado, here is the recipe and method for Poached Rhubarb Cream Pie:

First the crust: In a food processor or by hand, combine flour, butter, salt, and sugar until crumbly. Add the egg and mix gently until a dough forms. If the dough is still too dry, add a few drops of cold water until it comes together.

Refrigerate dough while you prepare the rhubarb. Cut rhubarb and strawberries into 1/2" chunks, reserving a 2-4 longer, thicker stalks for the lattice. Add lemon juice and chia seeds and set aside.

Once dough has chilled 30 minutes, roll it out and place it neatly into a 9" pie plate. Remember some shrinkage will occur so a little overlap on the edges is fine. Place the rhubarb/strawberry mixture in the prepared pan and bake at 350 degrees farenheit for 30-45 minutes, or until the edges start to turn golden and the filling has cooked down. I honestly don't know how long this took because I was paying so much attention to making the rhubarb strips.

While the pie bakes, use a vegetable peeler to thinly slice the rhubarb lengthwise. I used 21 strips to make my lattice but depending on coverage you want, you may need more or less. My lattice didn't cover my entire pie top on purpose.

In a saucepan, bring water and sugar to a low rolling boil. Place a few strips of rhubarb in the pan and poach for 30 seconds to 2 minutes depending on thickness. I found poaching until an "al dente" consistency is reached is best for weaving the rhubarb, so adjust the time based on the thickness. Once rhubarb is poached, lay flat on a cloth to dry. Make sure both sides are dry before weaving your lattice.

Once dry, start weaving rhubarb by laying all the vertical strips next to each other on a sheet of foil. One by one weave the horizontal strips, starting at the top until you have a square. I trimmed the edges roughly wherever they ended, making a square for the most part. Had it not been 95 degrees in my kitchen and I not been so eager to eat this pie, I may have gotten more creative. 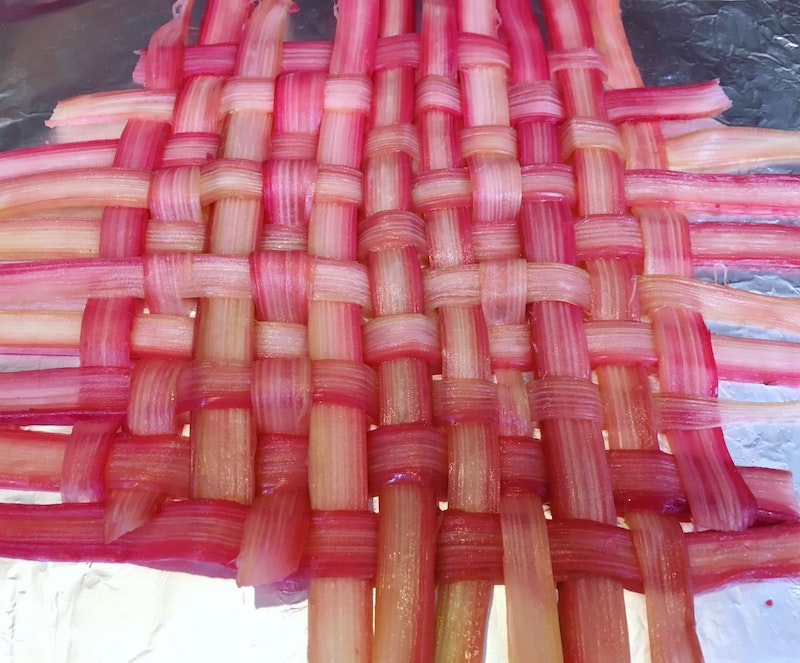 When the pie is done baking allow to fully cool in refrigerator. Once cool, top with whipped cream.

Once again make sure rhubarb lattice is dry by patting with a towel. Invert rhubarb onto the top of your pie and eat it immediately. We cut into our pie about 10 seconds after I took the photo.

And there you have it! Something new and easy to do with rhubarb. Honestly, in the future, I'm going to poach rhubarb to eat plain because it's simply so refreshing and good. Enjoy!