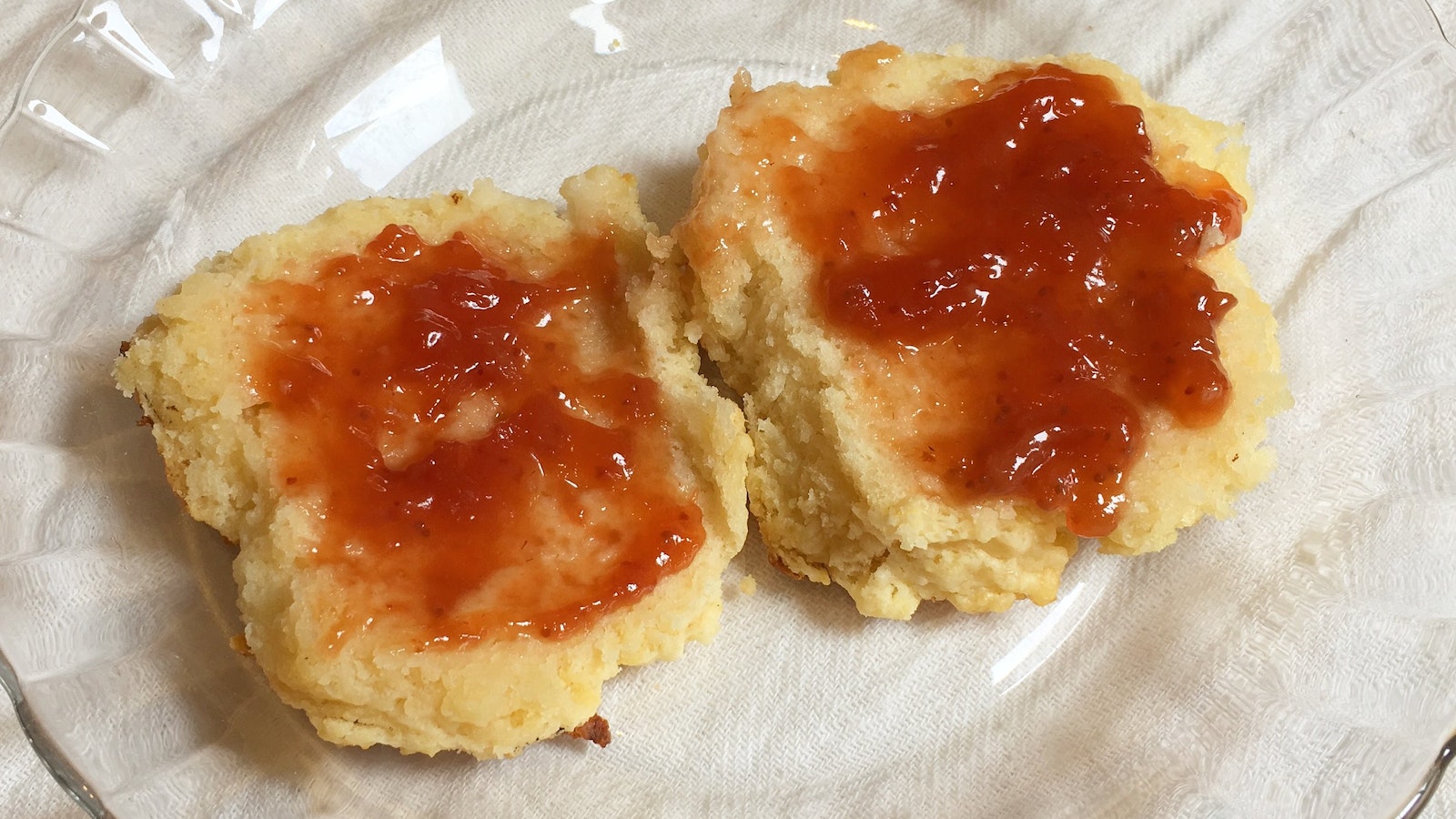 I have to admit, when I thought of living on a boat, one of my early thoughts was making biscuits. Growing up in the north, in my family, biscuits were something that you peeled out of a pressurized can with a certain doughboy on the front. Fighting about who had the honor of "bursting" the can was most of the biscuit excitement.

Other biscuit encounters involved them being covered in a sausage-filled gravy and served as a treat in my college's cafeteria. I've never been much of a gravy person, if you could even venture to call food service gravy actual gravy, and ruining the biscuits with such a thing was a turn off from biscuits for many years. Additionally, subsequent biscuit finds were dry, crumbly, and flavorless: the three worst things any glutenous object could inhabit.

Once we moved to the boat, I found myself trying various biscuit recipes. I tweaked a few to create this one. Spoiler alert: I add more butter than most biscuit recipes call for. In my northern, perhaps unpopular opinion, biscuits should be flaky but not dry, tender on the inside but not dense, tall and fluffy but substantial, and crispy on the outsides. The process should be easy and should be able to be accomplished in small spaces. Above all, biscuits should be made in cast iron pans because that's more rustic than baking in ovens and I enjoy rustic things. If a recipe can be made on a campfire, I like it. This recipe is each of those things.

My baking mind works in ratios. The ratio of liquid to dry ingredients is basically all you need to know to bake anything. Pancakes are roughly 1.5 times dry ingredients to wet ingredients with baking powder as leavening. Crepes are more wet, less dry, no leavening, and more eggs than pancakes. Bread is about 2/3 dry, 1/3 wet ingredients. Pie crust is twice the amount of flour as compared to the butter amount. This is what rambles around in my head while baking. I know the texture and consistency that things are supposed to be and mostly, I go on a whim like this, although not everything turns out perfectly.

Making these biscuits made me realize that my biscuit recipe created something that is basically fluffed pie crust. I'm giving you a way to eat pie crust without having to make a pie.

Additionally, if you want to be really original, you can add Mahleb (others refer to it as Mahlepi) which is a traditional Lebanese seasoning made from the ground pits of a sour cherry. It is my favorite spice, harboring a slightly nutty, mildly sweet yet savory flavor that I'm clearly terrible at describing. This addition makes these biscuits something that can clearly be identified as my creation, thus I highly recommend it if you're on the adventurous and non-traditional side of baking like I am. Serve these warm with any topping you like.

Heat cast iron skillet on stovetop. Mix flour, sugar, baking powder, and Mahleb together in a bowl. Slice butter into small pieces and cut into dry ingredients as you would a short crust. Once texture is crumbly, add milk and fold gently until ingredients are combined, being careful to not overmix. Melt a tiny amount of butter in skillet and scoop batter into pan in biscuit sized heaps. Cook both sides until golden brown, using a cover when not flipping to ensure middles are baked. Enjoy!