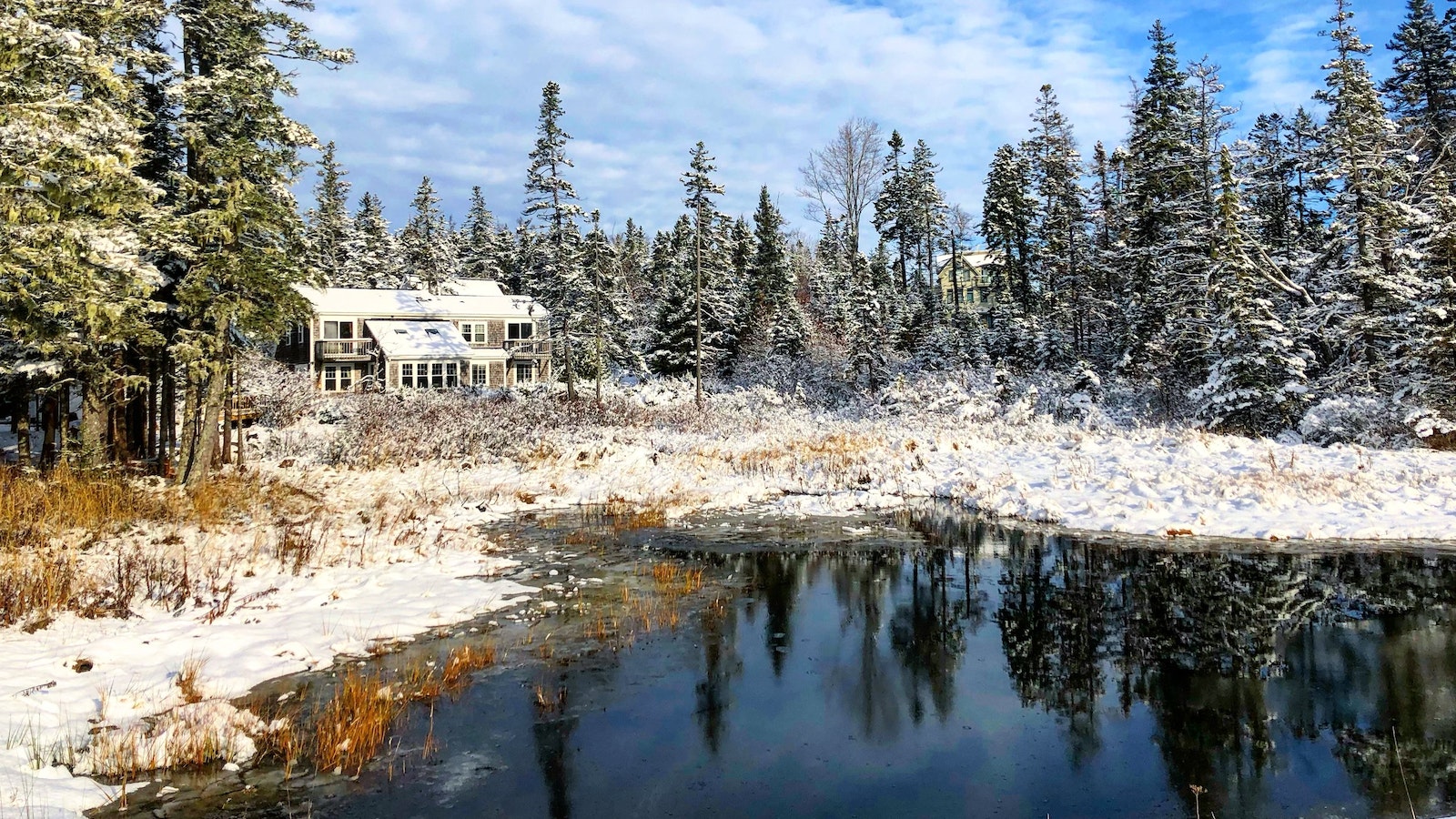 And for This Winter: Land.

It has been a whirlwind of transition over the last few months. I can’t report that everything has gone swimmingly, but it has gone mostly according to plan. A little over a month ago we had just arrived in Annapolis, where our journey began, and where I vowed that journey wouldn’t end. “We’re just taking a break for the winter,” and “We might want a new boat,” and “We’re clear out of money,” became the lines I put on repeat when explaining why we were preparing our boat for winter when EVERYONE around us was provisioning and outfitting to head south. I’m not a big “follower” of people unless they have wonderful ideas like sailing south for the winter, living aboard a boat, tasting every flavor of donut…those types of things. 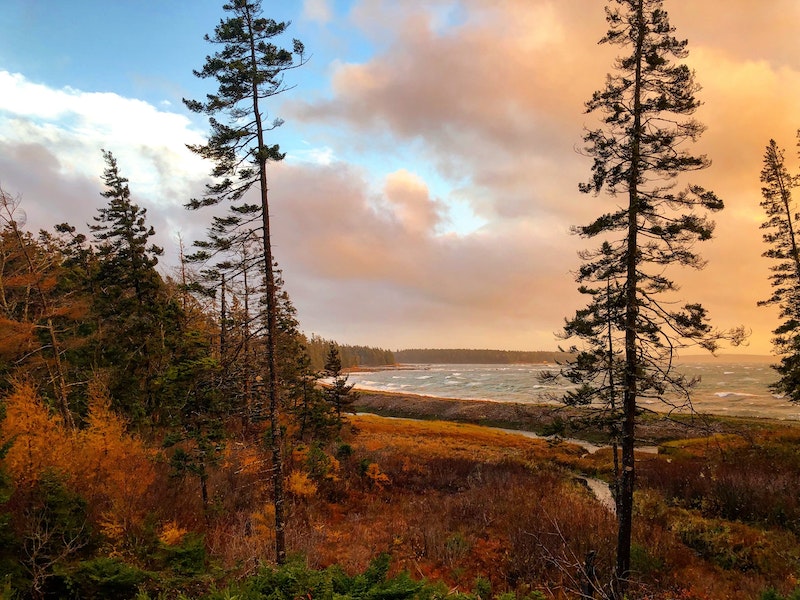 Sailing from Martha’s Vineyard to Annapolis on what I dubbed “possibly the last time we’d sail Twig,” (a phrase I kept repeating to Kai and Rev but mostly to myself as a mental preparer for what was to come), I felt settled in our decision to put Twig on the hard for the winter and take a break to make some money and in the very least, organize Twig. We decided to be efficient about the whole winterizing process and list Twig for sale as she was resting. 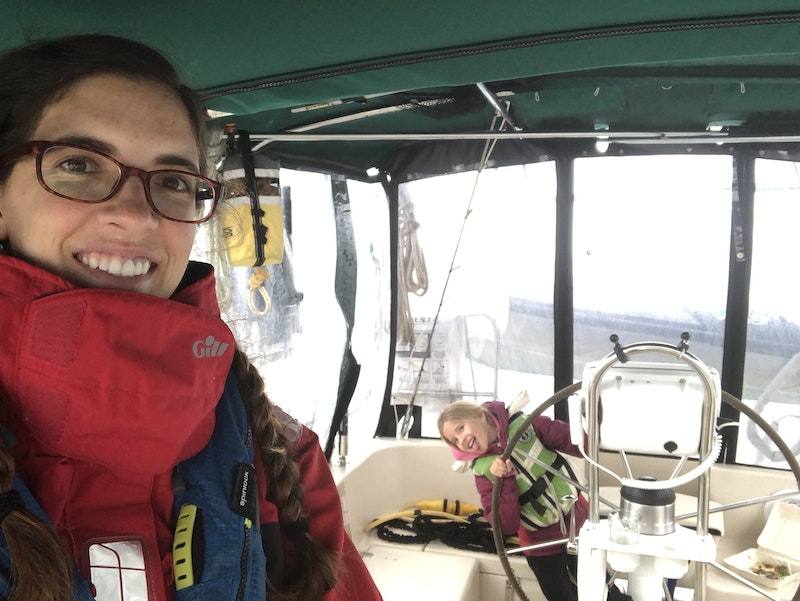 I know, I know, we just rename her, and after two years, she’s at the point where we feel completely comfortable on her. We know what she’s capable of, we know what she’s not capable of (basically nothing). In all honesty, after moving something like 17 times in the last 15 years, she has matched my mind’s perception of what my home should be more perfectly than anywhere I’ve inhabited.

In early September, we made the initial mistake looking at a boat for sale in Rockland, Maine. I still have mixed feelings about not negotiating to a positive outcome for that boat. She was a real project boat, but her hull and design were intriguing enough to stop us in our tracks. And that’s what quite literally happened. We saw so many things in that boat that we wanted in Twig; things we knew were impossible without a few more feet of hull.

We came to the conclusion quite easily that three things were happening in our boat life:

We had been putting off addressing these three things long enough. We knew this was the winter to stop boat life for a bit.

And just like that, four weeks have gone by of living on land. Who am I kidding?! It was not “just like that.” It was hauling everything we own off the boat by dinghy, driving it to a storage space in Annapolis, hauling the boat out, flying to Minnesota, buying a car and a trailer, driving all of our winter possessions across the country back to Annapolis, winterizing the boat, and finally driving to Mount Desert Island, Maine where we’ve rented a home for the winter. Pro tip: winter homes in eastern Maine are quite inexpensive. It was a rough few weeks of constant motion but we made it…four days before Kai flew to Norfolk, Virginia to help sail a friend’s boat to St Thomas. Another pro tip: sailing across the country is incomparably more enjoyable than driving across the country. 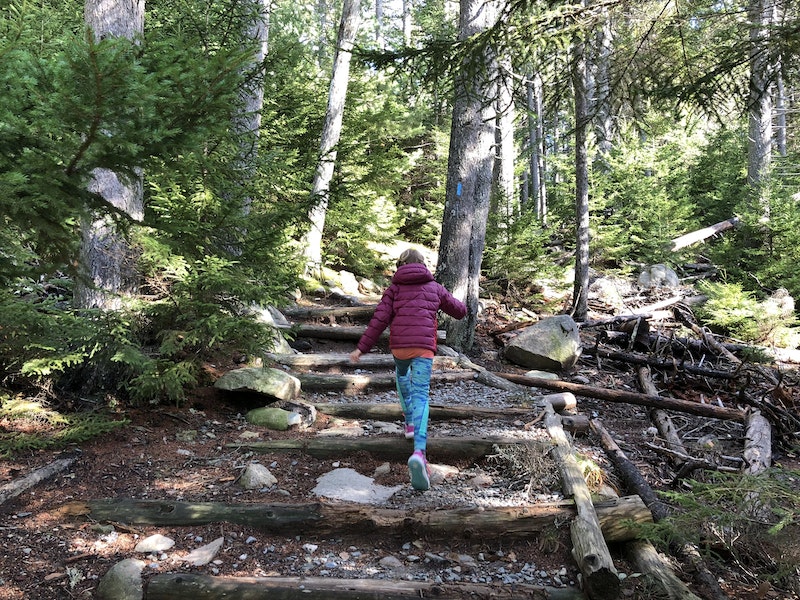 I sit in the sun, indoors, listening to Kai’s Pandora on a television (something I didn’t know was possible), and I finally make myself write about land life, only to write about the boat. Kai has been gone for a week and five days (but who is counting) and each song that plays reminds me of a time when we were sailing. We’ve had music on nearly every minute of every day on the boat, sailing or at anchor. My mind returns to salty air, constant boat chores, priceless unobstructed views, and complete privacy and solitude. 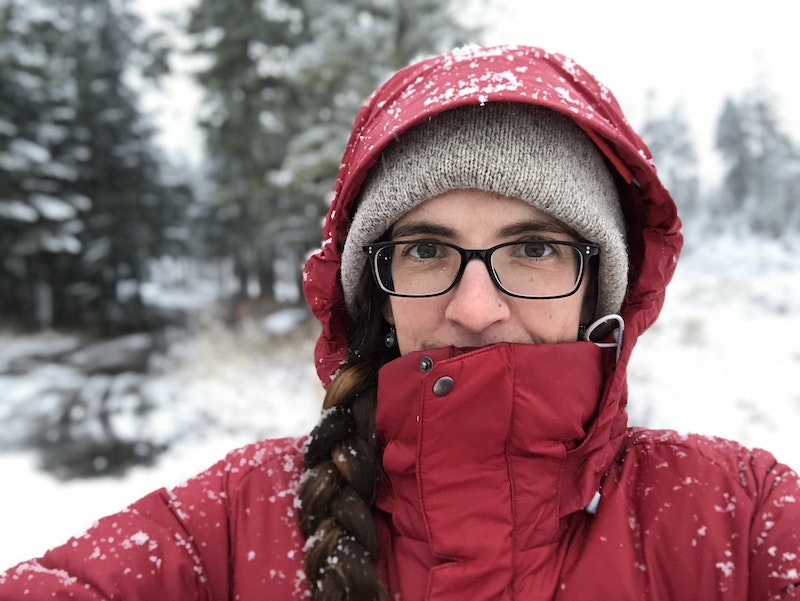 Not sure about this, but at least I have all the equipment from living in Minnesota

Land life feels strange to me. I’ve become fascinated by watching documentaries about Mormons, Hasidic Jews, Amish people, and other outsiders in American society. I feel a little ancient in my own home, fascinated by things like washing machines, whirlpool bathtubs, and a car that’s just sitting in my driveway, waiting to drive me anywhere I like at any given moment without any forethought. I look out the window in search for the wind instrument, wondering how many knots it’s blowing out there. Yesterday, I searched the kitchen and utility closet for 10 minutes for a water level gauge for our well. There isn’t one. I just have to trust that there will be water in there. The same goes for the septic system which I’m pretty sure doesn't ever need a pump out. We’re going to test that theory out (the owners never said anything about a pump out) just to add to the adventure of living on land. 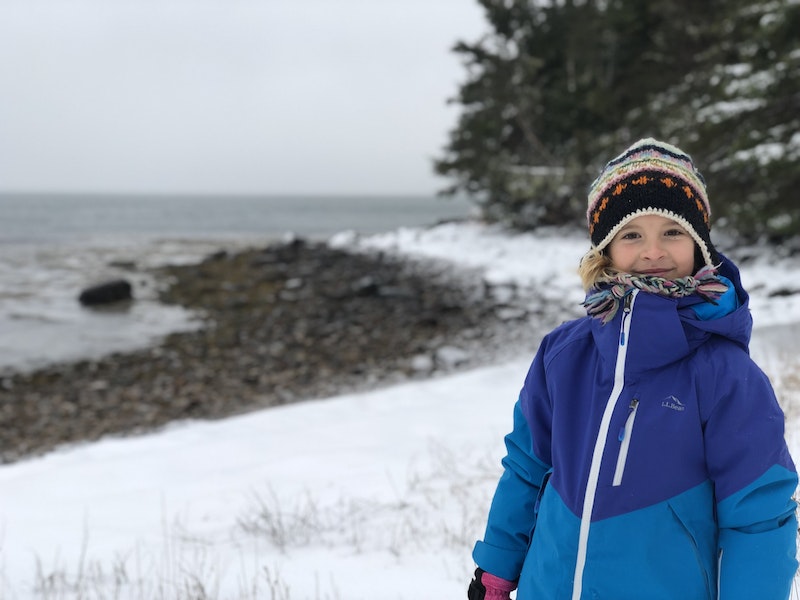 Rev enjoys winter at the beach!

Even in the hustle of getting Rev registered at school, managing our new life, and organizing our belongings, I feel underutilized. The tasks at hand on land aren’t nearly as dire as they are on Twig. I must enjoy that to some degree. I dare say that I miss washing dishes by hand, if only for the meditative exercise it forces upon me. Perhaps most surprisingly, I miss the water in our boat. Yes, the water from our own tanks that we made with our water maker. It’s filtered many times and treated with a UV light to kill viruses. It’s often a cause of stress for us, keeping the thing functioning or running the water maker when the batteries are already low from other draws. However, I’ll concede to Kai here: having high quality water is priceless, and mostly my hair is missing it greatly right now. When there’s no impurities in the water, it’s easy to achieve clean hair with little work! I’m really questioning the amount of shampoo people would save by just having clean water to wash themselves with instead of the chemical ridden city water (chlorine does a number on my hair).

I miss sleeping. Sure our sleep was often interrupted on the boat from noise or concern, but when I slept, I actually slept. And sure, I owe Kai a lot of checking on deck in the middle of the night because I’m rarely the one who goes out to check. The house is so damn quiet. It doesn’t move. I wake up feeling like I’ve slept on a flat board instead of a gentle hammock rocking in the sea breeze. I toss and turn all night and wake up unrested.

But most of all, I miss being out there, in the elements. Don’t get me wrong, we’re looking for pilot houses for a reason, but being in the outdoors 90% of the time is appealing to me. I like knowing what the wind and water are doing, even if I’m sometimes a little uncomfortable experiencing it. Being connected and dependent on Mother Nature is like nothing else in this world. It’s something I enjoy greatly and I’m not ready to live in a conventional house indefinitely at this time. 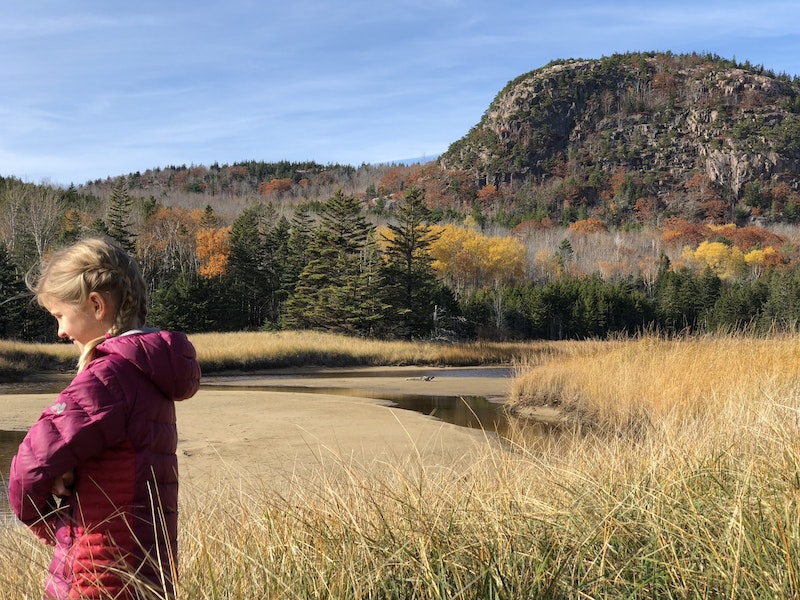 One might say that my whole life has been made of moments of feeling like I don’t fit in, but I’ve never quite felt like the literal fish out of water that I am now. I honestly did not expect the two years on the boat to overtake the other 32 years on land as what felt like “home.” Thankfully, we’re still by the ocean. It’s kind of an ideal place for us to be spending the winter and we’re lucky that we’re able to live here. Our rental home looks out on a large rocky beach that is a conservation area. I can still run out there and smell the salty rot of sargasso grass pushed ashore by the tide. I can hear the rocks tumbling as the waves hit. I still monitor the tides and wind coming across the bay. The energy of the sea is still near, the awareness of it’s power is present, even though we’re a little separated at the moment. 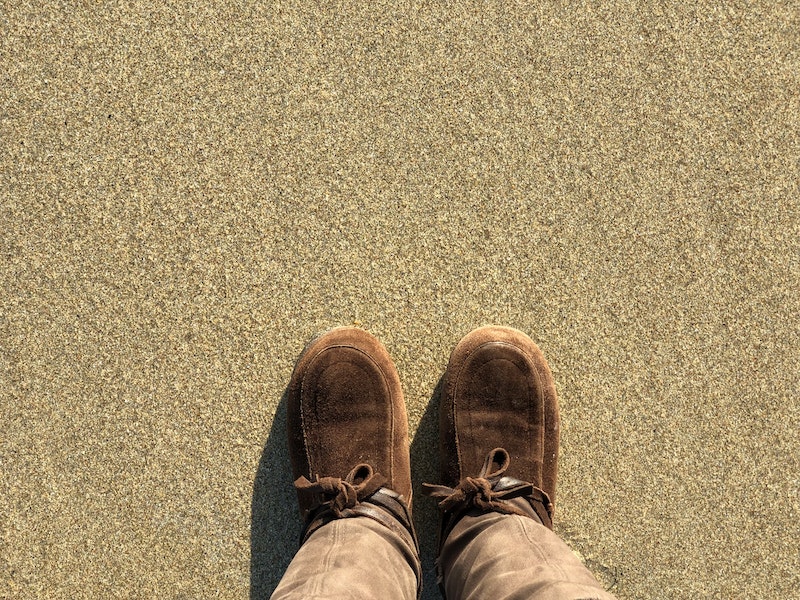 I’ve never worn my Mukluks to the beach.

So here we are, on land for the winter, and until I figure out how to make a ton of money with my Patreon, we’ll be working ourselves silly to make some money. In the meantime, we’re surrounded by a community that is blowing my expectations of winter in Maine out of the water! Everyone here is so damn nice! They’re welcoming and helpful in a non-patronizing way. They are tightly-knit and there’s never a day without an activity to join. They seem to like where they live. They don’t lament winter but rather embrace the natural world around them, exciting in the changes coming. It’s refreshing to be living in a winter land without the complaints. The island feels safe. People don’t lock their doors (I do, however). I asked a few people about crime on the island and they looked at me confused. After our former land home situated in the exact middle of urban Minneapolis, this feels like a nice departure.

Rev is enjoying school and meeting new friends. The kids at the school seem kind and warm, like their parents. They give hugs to her and greet her by name. The media would have me convinced that children these days were gaming, unsociable sloths if I hadn’t had such good experiences with these mainstream kids. Rev is adaptable. She’s easy going and has been dealing with all the changes we’ve thrown at her during her entire life, proving she’s more adult than I may ever be. 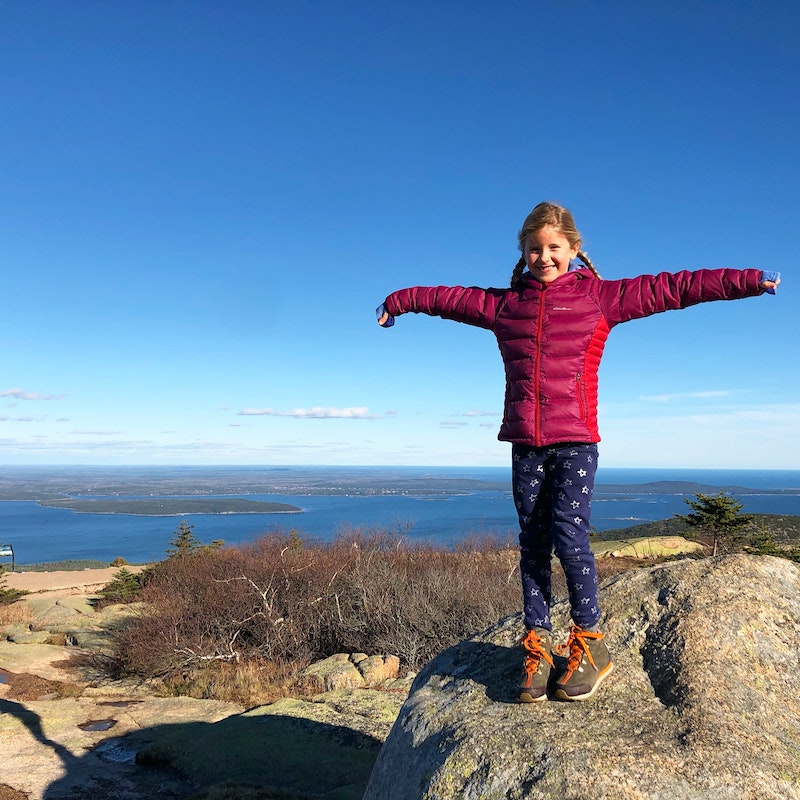 Atop Cadillac Mountain, sans the crowds!

What you will see this winter: 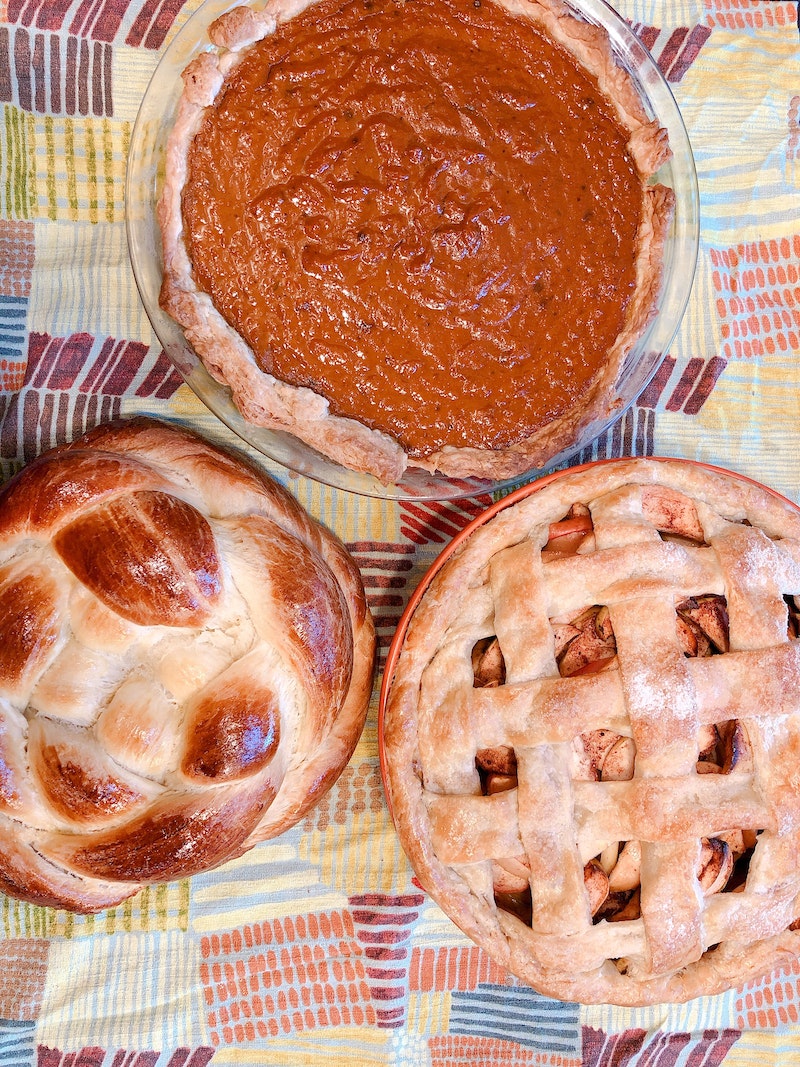