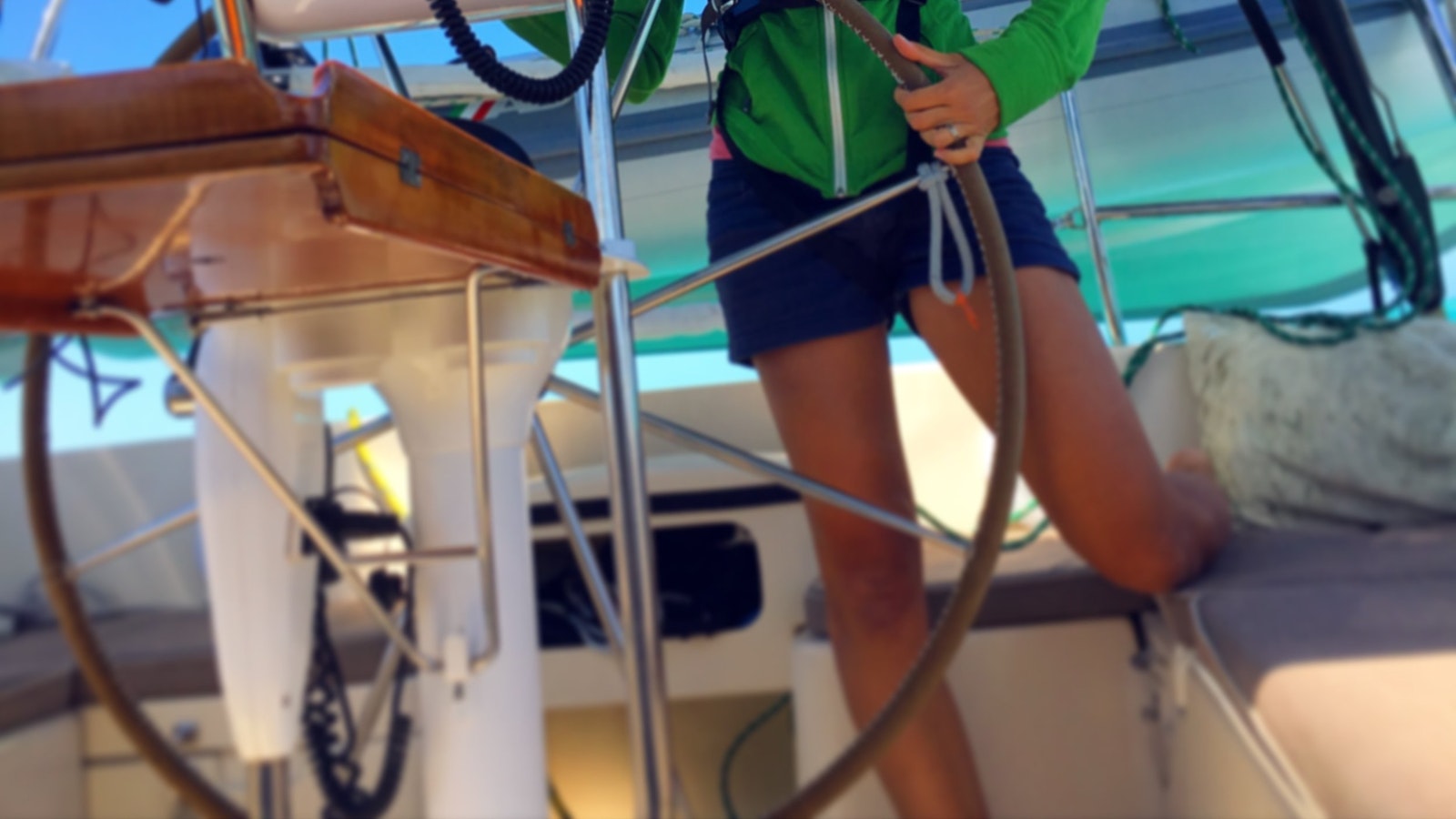 Selling Myself Short, and an Update!

For as long as I can remember my mother has been telling me, “don’t sell yourself short.” She has mostly meant this in a “be confident,” “you’re focusing on the negatives instead of the positives,” or other encouraging way, and mostly when I’m in the grips of holding myself to impossibly high standards. I do this. Kai does this. And now, Rev does this, because she has little genetic material to lead her elsewhere.

I’ve struggled a lot with feeling like I’m not good enough over the past few months (who am I kidding, it’s been years). Be it a product of being a slight perfectionist, wanting to please those around me, or being a woman in general, it has etched at my self-esteem in ways I’d rather it not. Becoming a mother was perhaps the first big blow to inflate the “I’m not good enough” ballon that floated above my head all day and night. As a mother, that feeling doesn’t ever really subside, but it had gotten better with time and evidence that I’m keeping this tiny person alive and she’s actually becoming a really cool person to be around.

The feeling was keeping to it’s corner until I started sailing, and it grew larger once we were living aboard our boat full-time. Every day brought something I either didn’t know how to do, or didn’t do well. Some days brought those situations with the bonus of something breaking, whether it was my fault or not. Many people who live on boats fear something will go wrong, but I fear not knowing what to do if it goes wrong, because on a boat, some problems are inevitable, and the difference between inconvenience and disaster is sometime just a wee bit of knowledge. Don't get me wrong, I still sailed and still chose a life living aboard a sailboat, but that choice sometimes brought the stress of not knowing what to do.

Even naming this website, "Sailing the Bakery," stemmed from thinking that the one thing I could do halfway decently was bake. I didn't think I was much good at anything else. Obviously I was good at other things, but many of those things were left behind when we moved to a boat. I no longer worked, my beloved bike was in storage, even my baking changed without access to endless butter and my kitchen tools. 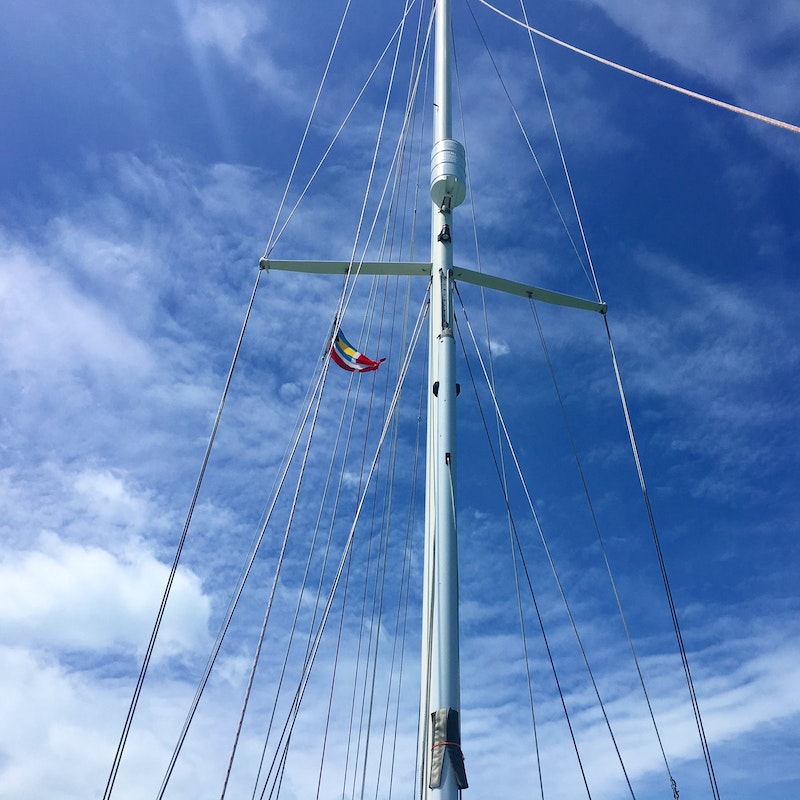 Our tattered Bahamas flag on the starboard spreader.

Earlier this week I asked another sailor why he was flying his courtesy flag (the flag of the country you’re visiting that you fly on a boat that's flagged in another country) on the port spreader instead of the starboard spreader. While I was quite certain it was incorrect, I asked him about it first; I delayed because I doubted myself. Women often do this: we’re taught to assume the other person, especially if it’s a man, is correct; that when we feel differently about something, it’s because we’re wrong, not the man. Whether intentional or not, it’s a thing. Anyway, he explained why he was flying the courtesy flag his way, and I confidently told him he was wrong. I did so in more words than simply, “you’re wrong,” but perhaps not as kindly as I could have. I did so in the manner which I’ve been told to do something so many times by men. I was confident, however. I felt comfortable with the subject matter. He objected to my correction and we ended up disagreeing amiably, but I was a little frustrated. We didn’t argue. We simply both left the conversation thinking we were right and the other was wrong.

Had the roles been reversed and I was being told what was correct, I’m nearly sure I would have conceded, looked it up later, and fixed the problem. My concession would have been clear and vocal, or I would have at least ended with, “I don’t know.” Had I been a man telling him that, had he not been so cavalier in his opposition to me? Who knows, but that is my assumption.

I’ve been thinking about this incident a lot since it happened because it happened just a week or so after I started studying for my United States Coast Guard captain's license. Getting the license has been something seemingly unattainable since I’ve started sailing, until now. I never thought I would already know a lot of the material, much less be able to understand and learn it. 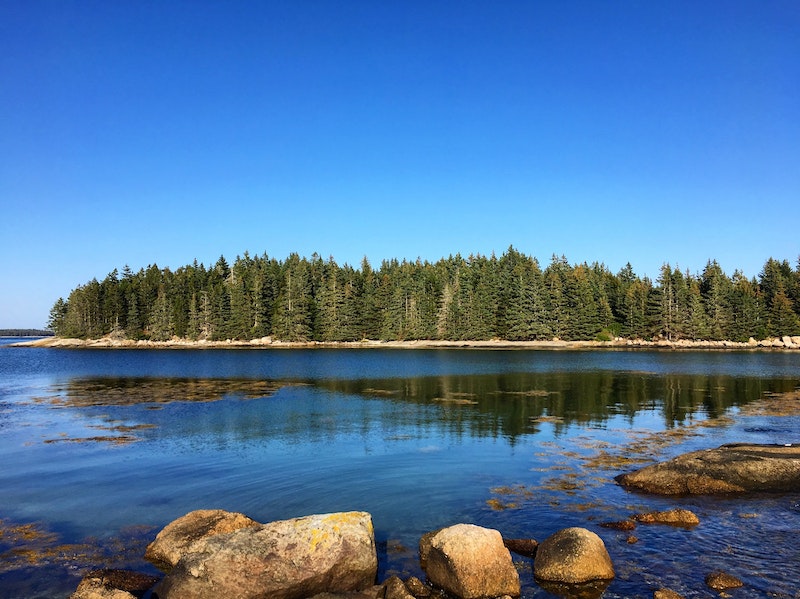 Maine in all it's beauty.

When Kai and I started our full-time sailing life, he was always amazed at how I could keep up in conversations regarding sailing and boats. When we get together with other cruisers, I’m usually drawn to the common “male” conversations about sails, boat systems, mechanics, technology, and gadgets. I’ve  realized that I actually know a lot about boats and sailing. I can pick a metal boat out miles away, and recognize our friends boats at a glance. I’m not new at this anymore. I’m not an expert by any means, but I’ve gotten some things figured out, and when one of us (usually Kai) is upside down in the bilge or engine compartment or when I’m holding a line with all my strength saying, “now what do we do?!” it’s important to remember that we’re not totally inept, we've figured a fair amount out, and we’re going to figure out this thing too.

This realization, that I can absorb information and skills and become a confident sailor has been helpful in deflating that “I’m not good enough” balloon. It’s become a daily practice to tell myself that I can accomplish what I put my heart and mind to. As we enter the second year of our life on the water, it's important for me to realize that we're not just floating around aimlessly. Part of getting my captain's license is making our life on the boat more intentional, more fruitful, and more knowledgable. It will also give me a good excuse to spend my time polishing the boat and keeping it looking sharp for our customers. If I pass, we'll be offering day charters aboard our boat this summer in Maine. Each day sail will include a fresh loaf of bread, of course! If I don’t pass, I’ll keep trying until I do. Wish me luck! I'm extremely nervous and excited all at once! 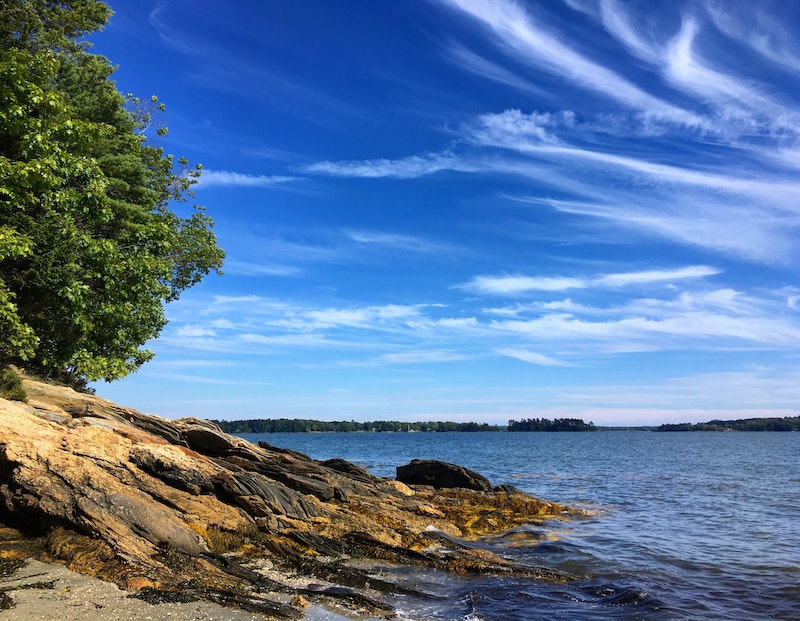 Maine in the summer.

So that brings me to the update part of this post:

In a few weeks we'll sail to Fort Lauderdale to do some preparations for this summer. In June, we will sail offshore from Fort Lauderdale to Portland, Maine and set up our summer base along the coast of Maine. We can’t get enough of Maine and feel like we only got a taste last year. One could spend their entire life sailing Maine and still have new sights to see. We’ll slow down a bit and get some work done, hopefully do some chartering, and breathe in all the low tide sea grass smells and dodge all the lobster pots Maine can throw at us. Then, in August, we’ll head to Nova Scotia for a brief late summer tour.

If you want to visit us Maine is the place to do it!