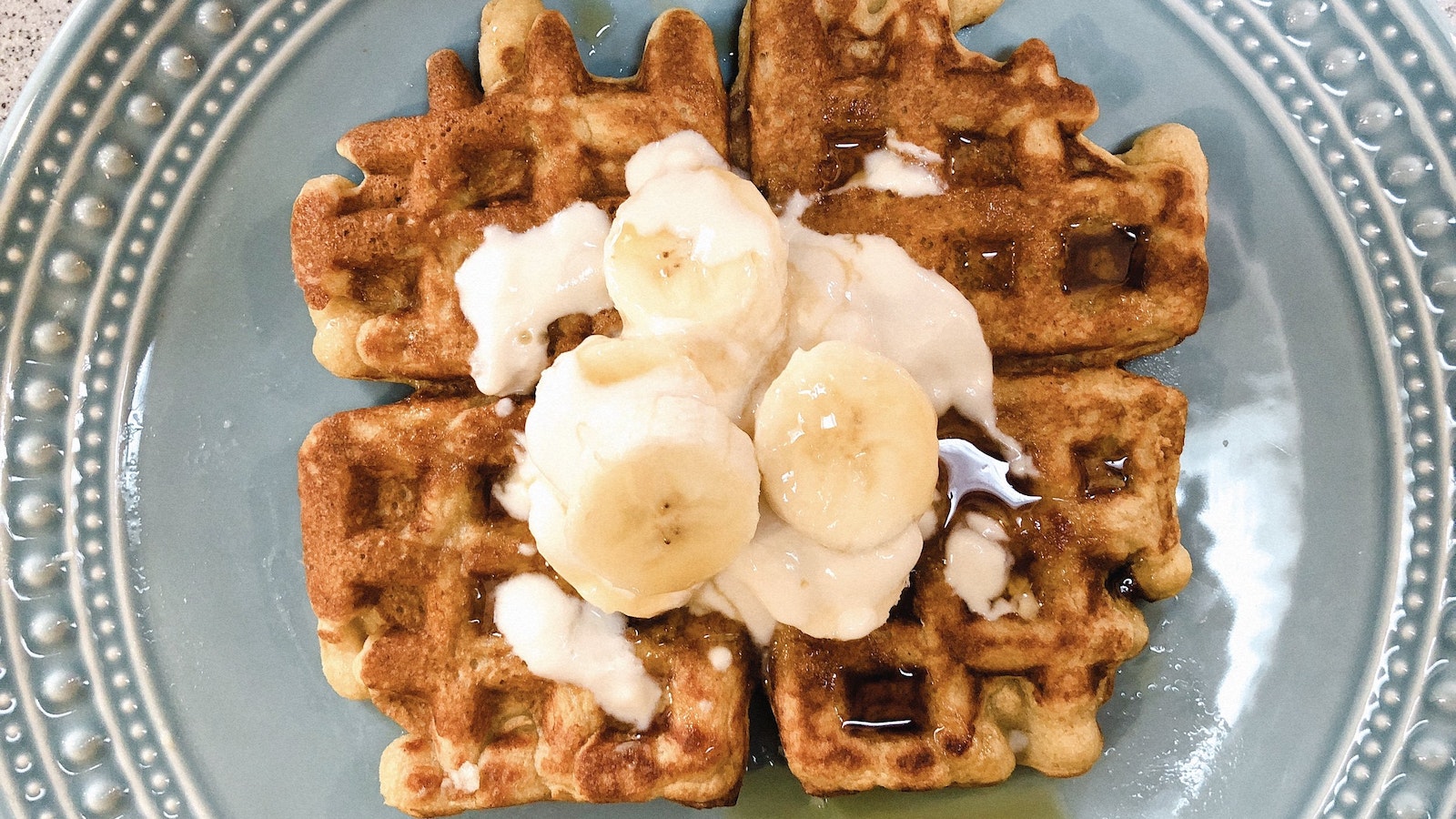 Waffles on a Boat!

Originally this post was all about the great cast iron waffle maker that I originally had onboard. I really did enjoy it but changes to our electrical system have started us on a path to removing our propane fuel system.

I’m keeping this article mostly as is because I know most boats will appreciate a small, stovetop waffle iron and the ideas, but I will update a few things.

First: if you do have the energy capacity, this is the waffle maker I chose. The All-Clad brand is highly regarded in the culinary world and it is the brand Kai had when I first met him. Clearly nostalgia plays a factor when making comfort breakfasts like waffles! But in all seriousness, I know Kai well enough to know that he always chooses the best/most quality items, and that he’s hard on his things, so anything that he uses has to hold up. Boats are also a hard environment so I wanted something that would hold up to potentially rattling around the cupboards while bashing into waves upwind. It’s a Belgian waffle iron, unlike my traditional cast iron one, but we’re finding we actually like that better…especially when the kids in the anchorage are starving and they need a huge waffle to eat while they’re waiting for the next waffles to cook.

So far, I’ve tried to mess up waffles in it and I haven’t been able to. We’ve made corn flour waffles, chocolate waffles, waffle cookies (which aren’t as good as I had hoped…they were like eating only the bottoms of cookies), overnight yeasted waffles, and traditional Belgian waffles. They’re all solid and I have yet to make a mess with waffle batter sticking or getting everywhere. The iron is very easy to use and I’m happy with my extravagant purchase! It is larger in size but only about a pound heavier than the cast iron one, so not much different there. The main difference is that it’s so much easier to use than managing two hot cast iron griddles (it separates) on the propane stove and takes half the time to make 2 waffles, so everyone is pleased!

Second: The recipe I’ve been using is a little different than my original one, but it works for basically any waffle maker! So I’ve updated it below and kept the original sourdough recipe for reference there too!

I gave up our waffle maker when we moved to Twig…well it’s in storage actually. Since it’s a big power load (~1000 watts) and takes up unnecessary room, it wasn’t a high priority. At the time my reasoning was that it was partially unnecessary due to the availability of a pancake maker…my usual cast iron skillet! I think I made some form of pancakes every other day last winter in the Bahamas. Maybe it was the excess of sourdough starter that I had on hand or just a lot of tweaking of my pancake recipe, but the result was Rev became really bored with pancakes. She’s now declared that she doesn’t like pancakes. 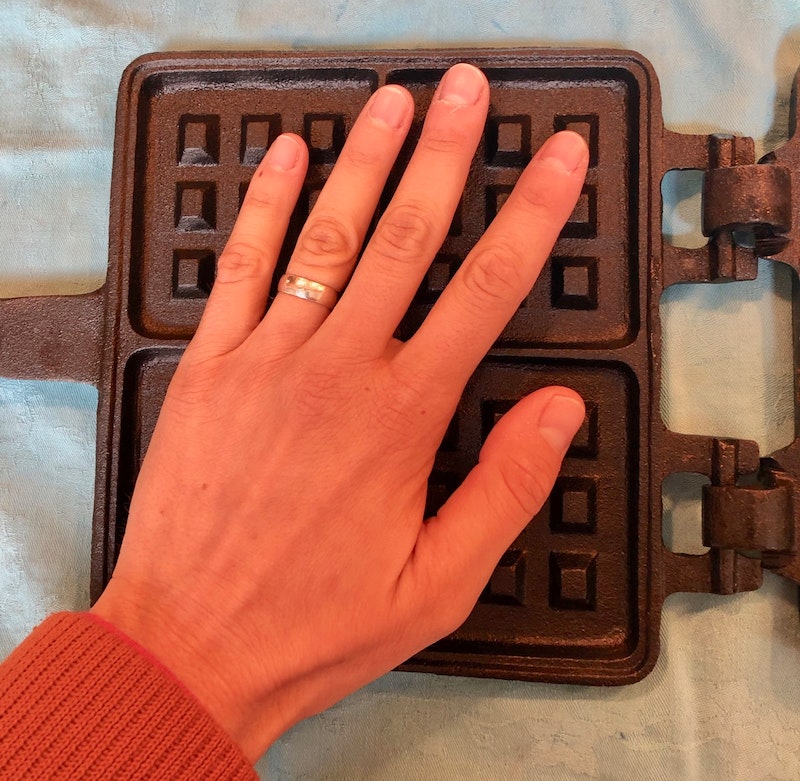 Mind you my hand is on the larger side, but this waffle maker isn’

Thus enter waffles. In my quest to make Twig’s galley super efficient this year (by having only the tools onboard that I use and making those tools the EXACT tools I want), I considered having a waffle maker for special occasions. But this time, I decided to try a low energy version of a waffle maker: a cast iron, stove top waffle iron! This is the one I chose!
There are a few designs out there for this type of waffle maker so I had to prioritize what I wanted. First, I wanted something that would hold heat well since it would only be heating from being on the burner, so one side at a time, and not be heated by electricity on both sides of the waffle maker simultaneously. This meant cast iron to me, but I paid for this in weight. The cast iron waffle maker I chose is quite heavy for it’s size, however it’s quite small, which was the next thing I considered. I wanted something small because our galley and stovetop space is limited. This waffle iron is slim and compact. It is also square which means that it fits well within the fiddles of our stove (fiddles are the tools that keep the pots and pans on the burner and prevent them from sliding around while sailing). I’m a fan of circular waffles, but I wanted square for this reason. 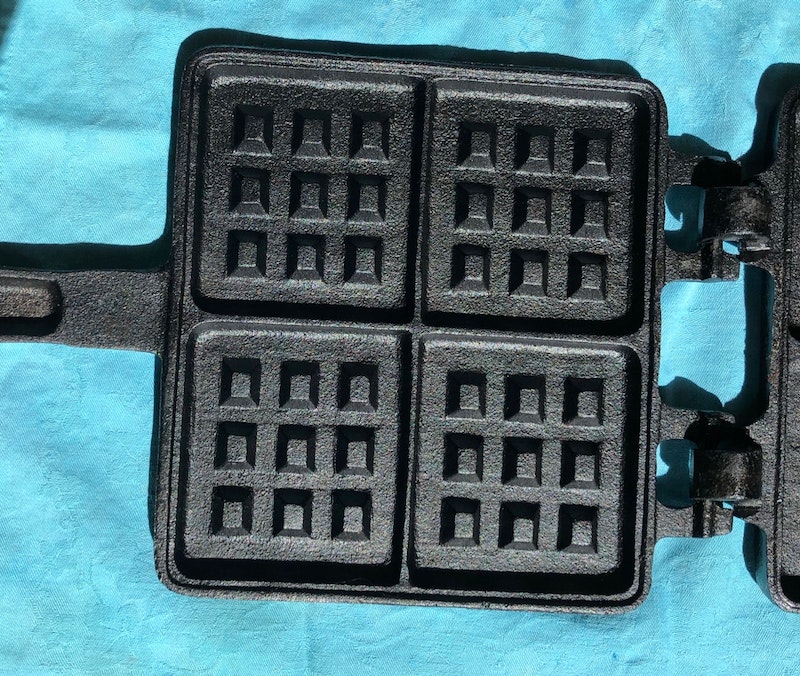 The trick to this waffle iron is to keep it really hot. This along with butter in the batter keeps the waffles from sticking. Greasing the iron with butter makes quite a mess while flipping it. I learned this the hard way and it is different from my experience with an electric waffle maker. The other trick is lots of flipping to keep the two sides of the iron hot. It takes a bit for cast iron to heat up so preheating is necessary, but it seems like this waffle iron also cools quickly if you don’t flip it multiple times during the cooking process.

I have a mixed review of this waffle iron. There are definitely some positives to having it aboard. The waffles turn out great as they should: crispy on the outside and tender on the inside. The iron doesn’t make a mess like some people say on the online reviews. I think those people didn’t have the iron hot enough or aren’t familiar with cast iron cooking. Having waffles instead of pancakes are a hit at the moment!

The downsides are the weight of the iron: it’s heavy and makes for a little awkwardness when flipping it. The hinge is great in the fact that it allows the sides to be separated for fast heating and easy cleaning, but they’re sometimes hard to reconnect when it’s hot and you’re using an oven mitt made for a right-handed person (perhaps that’s just my problem in addition to the previous problem). The best part of that problem is that a left-handed person gave me that right-handed oven mitt...thanks mom!

But all in all, we’re going to keep it for now and keep trying out new uses and recipes on it.

If you’re looking for a change of pace from regular waffles, check out my savory waffle recipe! They’re amazingly delicious and a really great addition to boat brunch with friends!

Makes about 10 waffles in the All-Clad iron

Pre-heat waffle iron (I usually use a 5-6 setting on the dial). Separate egg whites from egg yolks into two bowls. Beat the egg yolks until bubbly and add milk. Carefully add flour, baking powder to eggs and barely mix. In separate bowl, beat egg whites until soft peaks form. Add egg whites to batter by folding them in very carefully. Carefully add butter to mixture and sprinkle sugar on top. The key is not over-mixing the batter and having the butter and sugar be the last things that you add so that they caramelize. Spoon batter into waffle iron and enjoy!

Preheat waffle iron on stove top. Put dry ingredients in bowl and then add wet ingredients. Spoon 1/2 cup batter into waffle iron, close, and flip. Flip every 2-3 minutes until golden brown and crispy on the outside. Serve immediately or keep warm in a 200 degree F oven. Top with your favorite items!